Active-bending was established as a new Study Group within the IASS Working Group 15, “Structural Morphology Group” (SMG) in 2012 at the IASS conference in Seoul. In this paper many important historical examples of active-bending were gathered, dating back as far as early Mesopotamian dwellings up to the comparatively few contemporary examples of bending-active structures existing at that moment.

Since the founding of the study group the community of researchers as well as practicing architects and engineers has rapidly grown and managed to establish the subject within multiple simulation software, many realized prototypes and some commercial building structures.

The current paper highlights some recent developments in the field of active-bending. As part of an outlook, some future trends are discussed to critically highlight the potentials of using active-bending as a promising approach to novel hybrid building structures. 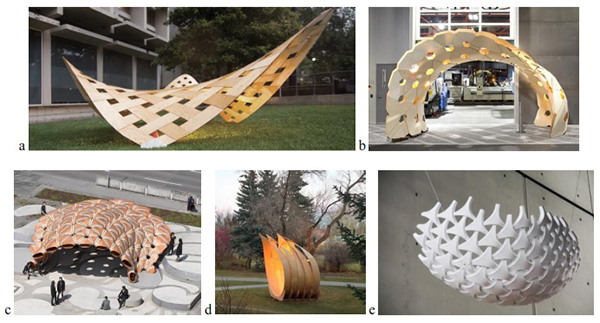 Active-Bending is understood as an approach to generate curved structural form by means of elastic bending from initially straight or planar elements. Structures built on the basis of these principles are referred to as bending-active structures.

As such, bending-active structures do not describe a specific structural type, but rather an approach. Within this deliberately open definition some types of bendingactive structures may be differentiated: Elastic Gridshells – Bending Plate structures – Textile Hybrids – Elastic kinetic structures.

While elastic grid-shells have been discussed within IASS ever since their first appearance in the 1960s, the other types have only few precursors. In recent years, and especially since the founding of the activebending group within IASS, the community of researchers as well as practicing architects and engineers active in this field has rapidly grown and managed to establish the field of study through the development of several simulation software, many realized prototypes and some commercial building structures. In this short review some recent developments in the field of active-bending are highlighted. 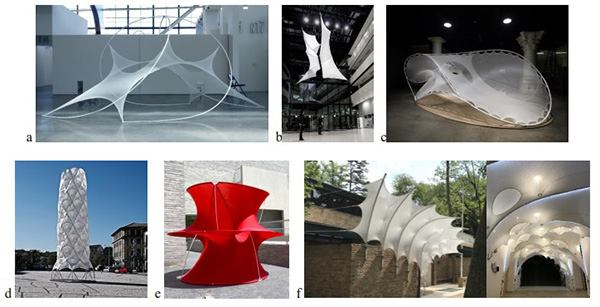 This short review shows that the activities around the subject of active-bending have drastically increased in recent years. Starting from an initially loose association of common interests, some clear fields of research and structural types were established. Whilst software to simulate bending-active systems was still rare at the time of the study group establishment in 2012, our computational means have advanced considerably since then.

Today there are multiple integrated software tools on the basis of particle spring systems with dynamic relaxation solvers, the most prominent being Kangaroo 2 by Daniel Piker with a pipe line trimmed towards calibrated form finding of bending active systems by Quinn et al.

Finite Element software like SOFiSTiK have been optimized towards faster and more integrated form-finding procedures with a most recent addition of an active-bending beam module which enables the formfinding and simulation of bending-active structures starting from curved input geometries and therefore providing a direct link to ‘pre-formfound’ exported geometries, for example from Kangaroo.

With the rapid development of Isogeoemtric Analysis there is also a most recent addition of a completely new approach to formfinding and simulating bending-active structures directly within the CAD definition of Splines and NURBS surfaces.