1,2,3Singapore University of Technology and Design

Although parametric modelling and digital design tools have become ubiquitous in digital design, there is a limited understanding of how designers apply them in their design processes. This paper looks at the use of GHShot versioning tool developed by the authors used to capture and track changes and progression of parametric models to understand early-stage design exploration and collaboration empirically.

We introduce both development history graph-based metrics (macro-process) and parametric model and geometry change metric (micro-process) as frameworks to explore and understand the captured progression data.

Figure 2. Base Truss Parametric Model given to the cohorts.

With the rise of the web in the 90s, the concept of the Virtual Design Studio (Wojtowicz, 1994) was born into the architectural pedagogy, where design projects were done over the network. During subsequent implementations of this concept, learning and collaboration was the focus, such as ETH Zurich’s phase(x) (Hirschberg & Wenz, 1997), Harvard GSD’s OpenD (Meagher, et al., 2005) or AA Design Research Lab’s Collaborative Distributed Learning (Steele, 2006).

Students were to exchange design works periodically, modify them creatively in a collective authorship scenario on a common web platform. However, such platforms often remained one-off technological proofs-of-concept, and lacked further investigation into the design process (Achten, 2009). 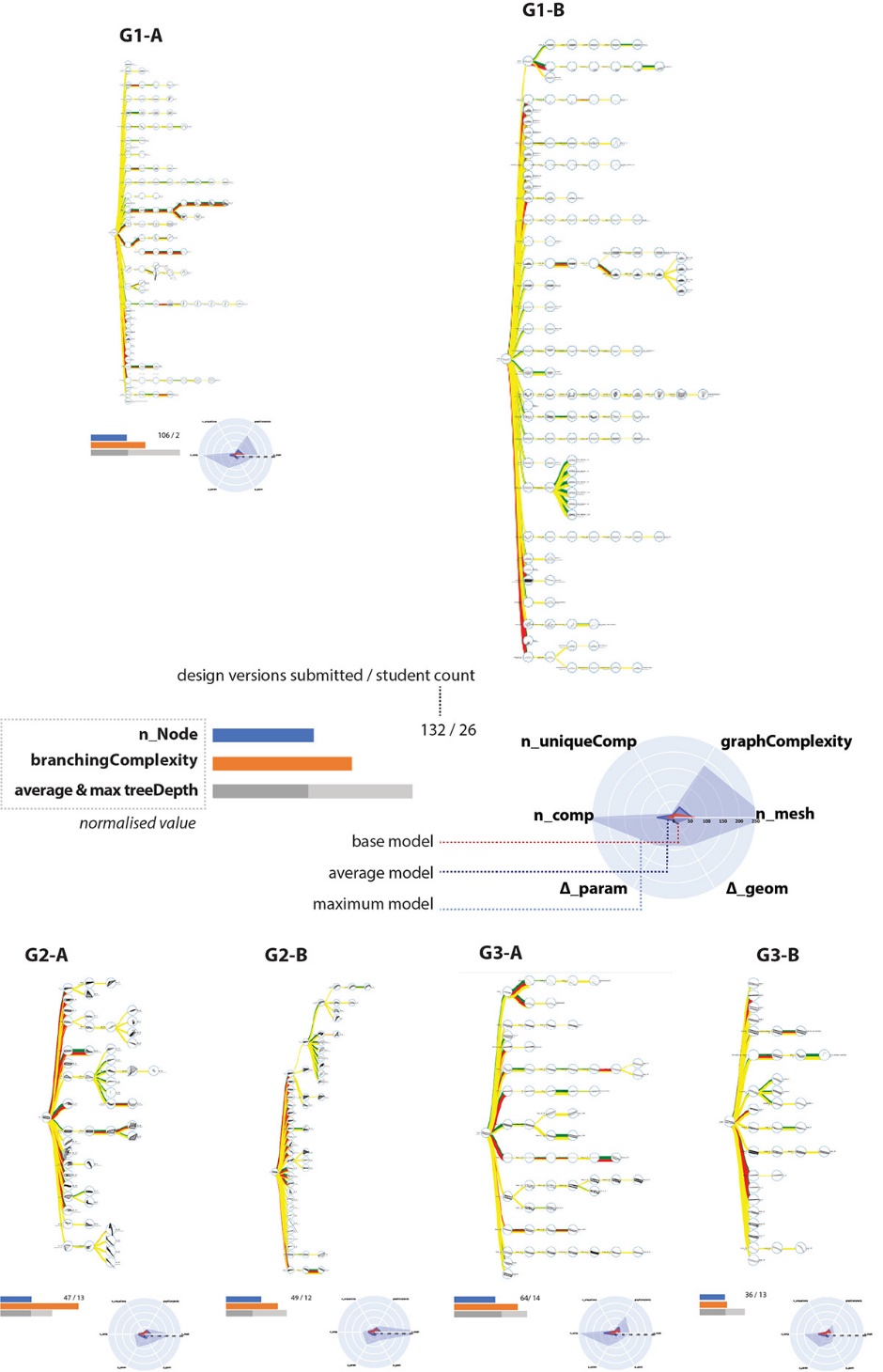 Figure 4. Design change tree and metrics visualisation from 3 cohorts. Radar areas are indicative of the initial metrics value and the extent of the students design space exploration.

In our context, we are interested in being able to meaningfully understand parametric design beyond its individual model level and probe further into its development process and collaboration, especially with the cohorts’ design versions data. Both a macro (overall development) and micro (detailed, versions-based) approach are used for evaluation.

Figure 5. G2-B’s 13 clusters of design ideas from the design versions.

Geometric change can be the extent of design space explored (Brown & Mueller, 2019) and is often attributed as a measure of design creativity as it means designers are not fixated on a particular design (Nathan, 2015). To measure this, Hausdorff distance calculation from Meshlab library (Cignoni et al., 2008) was used.

This distance (Δ geom) is defined as the maximum distance of a set to the nearest point in another set. Hence, the higher the distance value is, the more dissimilar the two geometries are (see Table 3). The nMesh metric mentioned previously was not used because the change in the mesh count does not necessarily represent the change geometry topology. 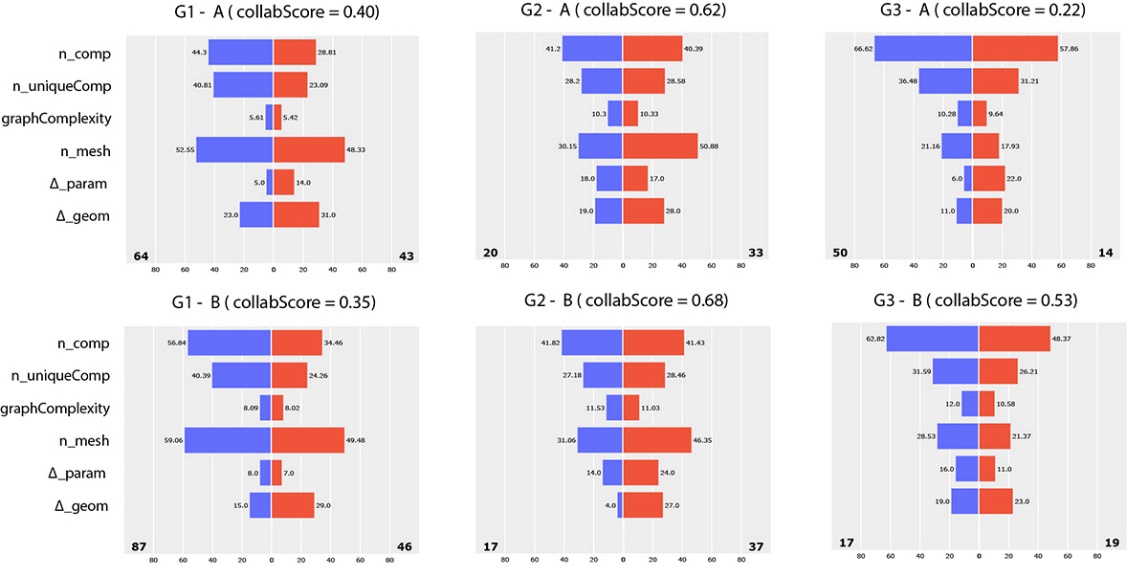 In this paper, we have demonstrated how collaborative parametric design exploration process can be (1) captured through the practice of versioning and (2) interpreted through the proposed metrics. At the macro level, history tree-related metrics such as the number of nodes, branches, and depth of the tree are used as proxies to describe the design space explored in terms of its size, diversity, and development of ideas.

At the micro-level, design change metrics for both parametric and geometry models were established to evaluate and categorise the modifications performed. For example, the change metrics were useful to see how some students are more versatile in their designs through the wider range of metrics extracted from their design versions.

In the collaboration context, time appears to be a crucial factor: little difference was observed in the change metrics when one was modifying his/her personal design vs others’ in the shorter given time. In contrast, larger and more complex parametric model modifications were observed with own models when longer time is allowed.

Finally, while in this paper we have started utilising data to develop metrics towards understanding the design process better, the availability of such design progression data opens the door to wider possibilities for digital and parametric design. 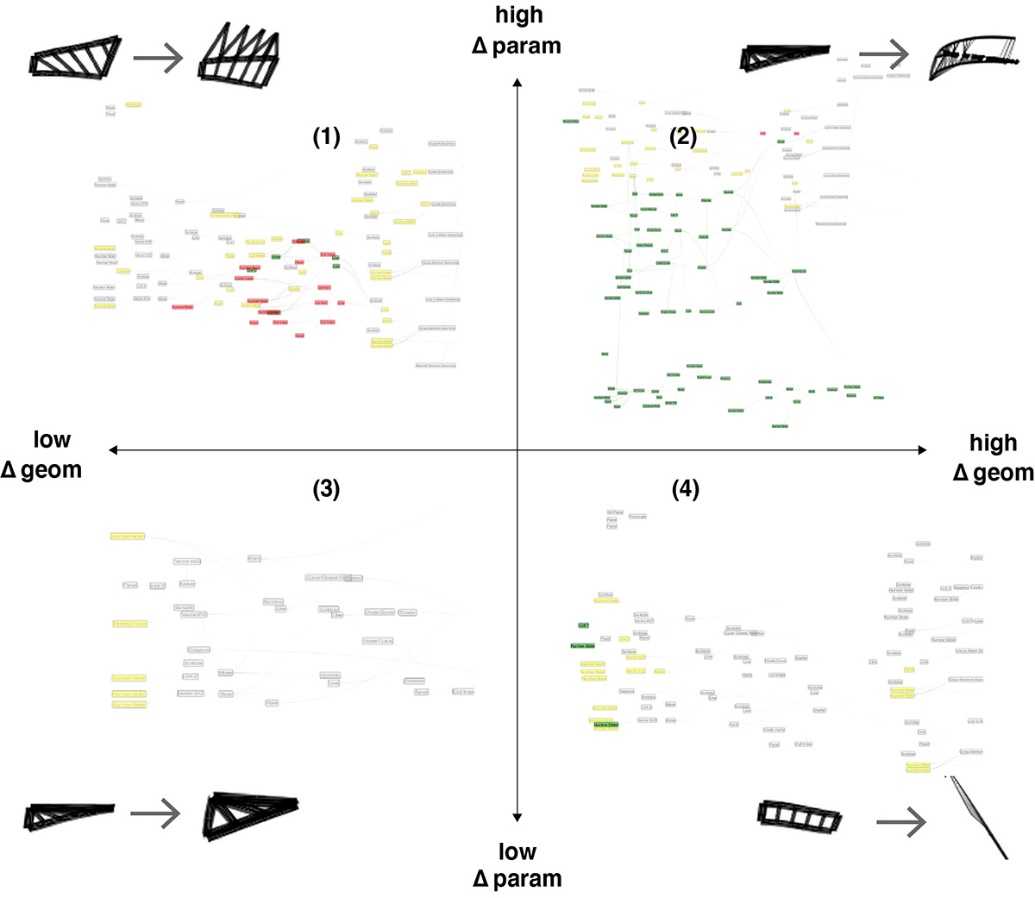 In software engineering, where versioning was initially used, version data is also used to identify which programmers introduce more bugs (Kim et al., 2006). A similar approach can be used to determine which designers contribute significantly to design development. For example, in a pedagogy context, this can be used to support students who are lagging and support them.