Figure 1: Reciprocal frames usually consist of straight beams with rectangular (a) or circular (b) cross-sections. Although the complexity of the nodes is limited by connecting only two elements at each joint, the inclination of the beam elements requires cutouts or inclined bolt holes. Using flexible, curved elements (c) avoids this, allowing simple bolted connections thanks to coinciding tangential planes.

As mutually supported beam structures, reciprocal frames limit the number of components that are joined at each connection to two. However, this system of intermediate connections introduces undesirable bending moments in the beam elements.

Figure 2: Based on a polyhedral shape, in this case an icosahedron (a), we can model a spherical reciprocal structure by projecting the edges on the circumscribed sphere (b), rotating them (c) and finding the four intersection points (d).

Figure 3: By rotating the beam elements on the spherical surface, the intermediate connections slide over the beam. In the middle they flip sides, creating the reciprocal configurations of the original polyhedron’s dual (here the dodecahedron). Thus, each configuration has a dual consisting of the same components (a and d, b and c).

Therefore, we investigated the principle by developing a design methodology based on polyhedral shapes. As this work is part of a research on transformable, rapidly assembled structures, the focus lies on simplicity of the connections, uniformity of the components and reconfigurability. 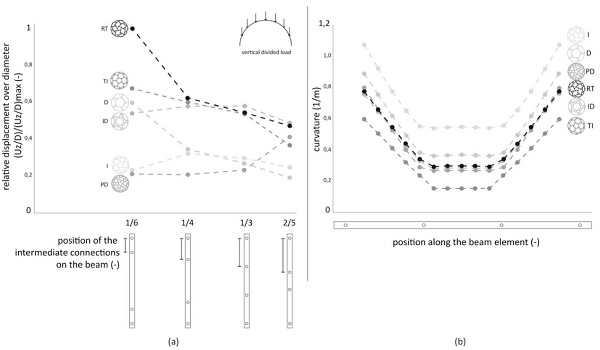 Figure 4: Although geometrically easy to reconfigure, the different dome types behave differently upon loading. (a) The selection of a beam element defines the spread of solutions for the different configurations. Moving the intermediate connections towards the ends enlarges this spread, which is unfavourable. (b) The variation in the curvature, and as a result the pre-bending, for different dome types complicates the dimensioning of the flexible beams, as the required flexibility reduces the stiffness of the assembled structure.

This paper discusses the development of a kit of parts of reciprocal bending-active components based on a selection of polyhedral dome types. To simplify the assembly of the structures and avoid the manual bending of the components on site, we introduce the concept of a double-layered, pre-bent component. 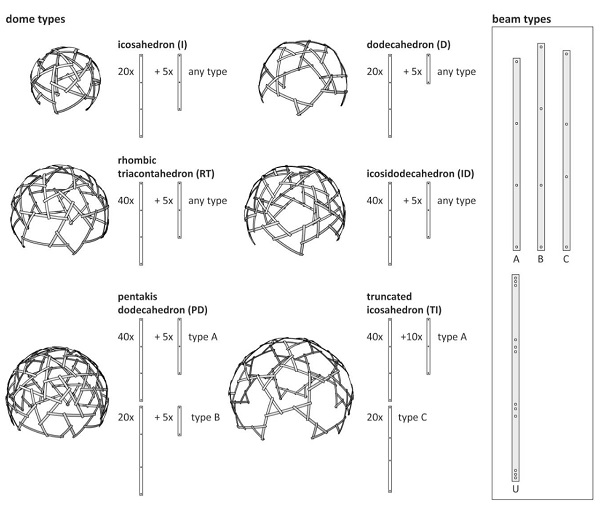 Figure 5: Six polyhedra are well-suited for the development of bending-active reciprocal domes. As we can construct all these configurations with only a limited number of different beam types, several possibilities for developing a kit of parts exist. Moreover, a universal component (beam type U) could combine all the necessary bolt holes in one single beam element.

Finally, this paper presents the development, fabrication and assembly of the ReciPlyDome, a full-scale prototype of a bending-active reciprocal dome with double-layered components. Preliminary analyses of the load-bearing behaviour show the potential of these systems for material-efficient, lightweight structures.

Figure 6: A double-layered component allows to pre-bend the flexible elements in the desired shape, avoiding on-site bending during the assembly. (a) Both layers allow intermediate connections, reducing the inclination when connecting to the least curved bottom one. (b) The only requirement is that the component contains the correct connection locations for the desired geometry, and allows planar connections between the end and intermediate connections. (c) One specific component curvature corresponds to the desired dome geometry, here the rhombic triacontahedron.

The research presented in this paper contributes to the understanding of bending-active reciprocal frames as a structural principle for temporary and rapidly assembled structures.

Figure 7: The curvature of the bending-active components influences their load-bearing behaviour in the reciprocal geometry. (a) The curved components have a higher resistance to the bending imposed on them by the reciprocal organisation of the elements. Although the layers are only connected at the ends, the double layering has a significant effect on the structural performance. (b) This is also the case when applying the double-layered component to a dome, as its performance is quite close to that of a single-layered component with double thickness.

Reciprocal frame structures consist of a grid of mutually supported beams. The organisation of these beam elements in a weave pattern invokes structural stability and limits the number of elements joined at each connection to two.

The resulting reduced complexity of the nodes and the ability of creating grid structures with shorter, discontinuous elements are the main advantages of reciprocal frames. 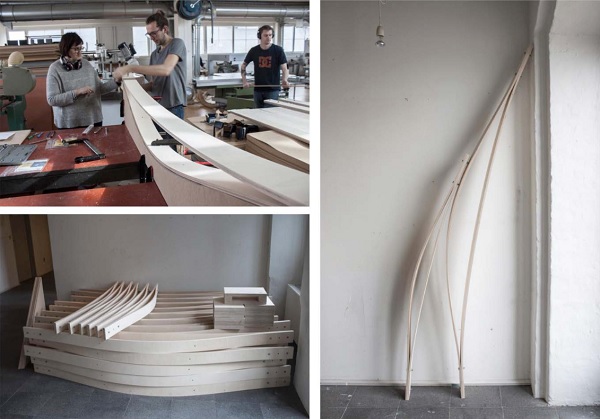 Figure 8: The double layered components consist of two plywood laths of 12mm, connected at the ends. Pushing and fixing the top layer onto a jig simplifies the fabrication process, allows manual assembly by one person (top left). The kit of parts for the structure consists of only two different pieces (right). Thanks to the discretisation of the elements in the reciprocal organisation, the elements remain fairly short and the full set of components very compact (bottom left). (pictures by Jack Cripps)

The induction of bending forces due to the intermediate connections is a significant drawback, often causing the disfavour of reciprocal structures towards other structural systems.

On the other hand, recent advances in the design and analysis of bending-active structures show the potential of bending as a formation process for curved structures. The elastic deformation of flexible components allows the assembly of curved structures from flat or linear elements and facilitates reuse, transport and reconfiguration thanks to its reversible nature. 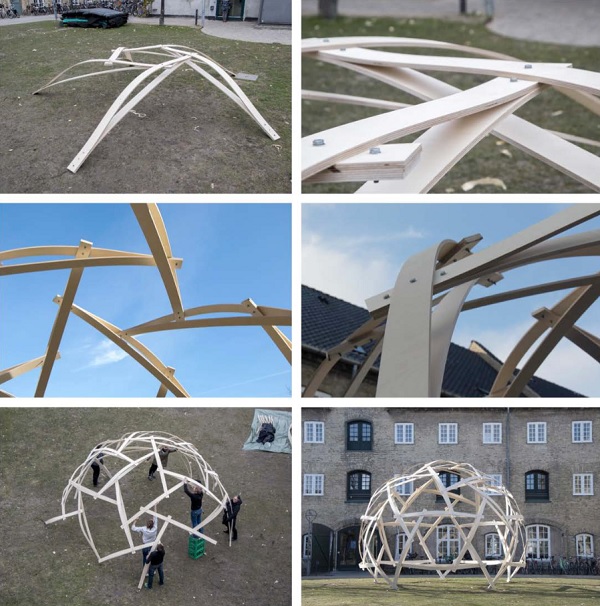 Figure 9: We constructed the ReciPlyDome from six pre-assembled pentagonal modules, optimising the assembly time on the ground (top left). Thanks to the very simple connections (top right), the assembly required only basic hand tools (bottom left). The components allowed just enough deformation to manually induce the torsion needed to align the components at the connections (centre). The fully assembled structure is lightweight but shows efficient shell behaviour (bottom right). (pictures by Jack Cripps)

Thus, the potential of bending-active reciprocal structures lies in the beneficial manipulation of bending forces to further simplify fabrication and detailing. Figure 1 shows a reciprocal configuration of three bending-active elements with flat cross-section next to the commonly used rectangular and circular ones.

Whereas the beam inclinations constitute a certain joint complexity with cutouts or inclined bolt holes for the latter, bending-active elements create the inclination by their curvature, enabling simple bolted connections between tangential planes.