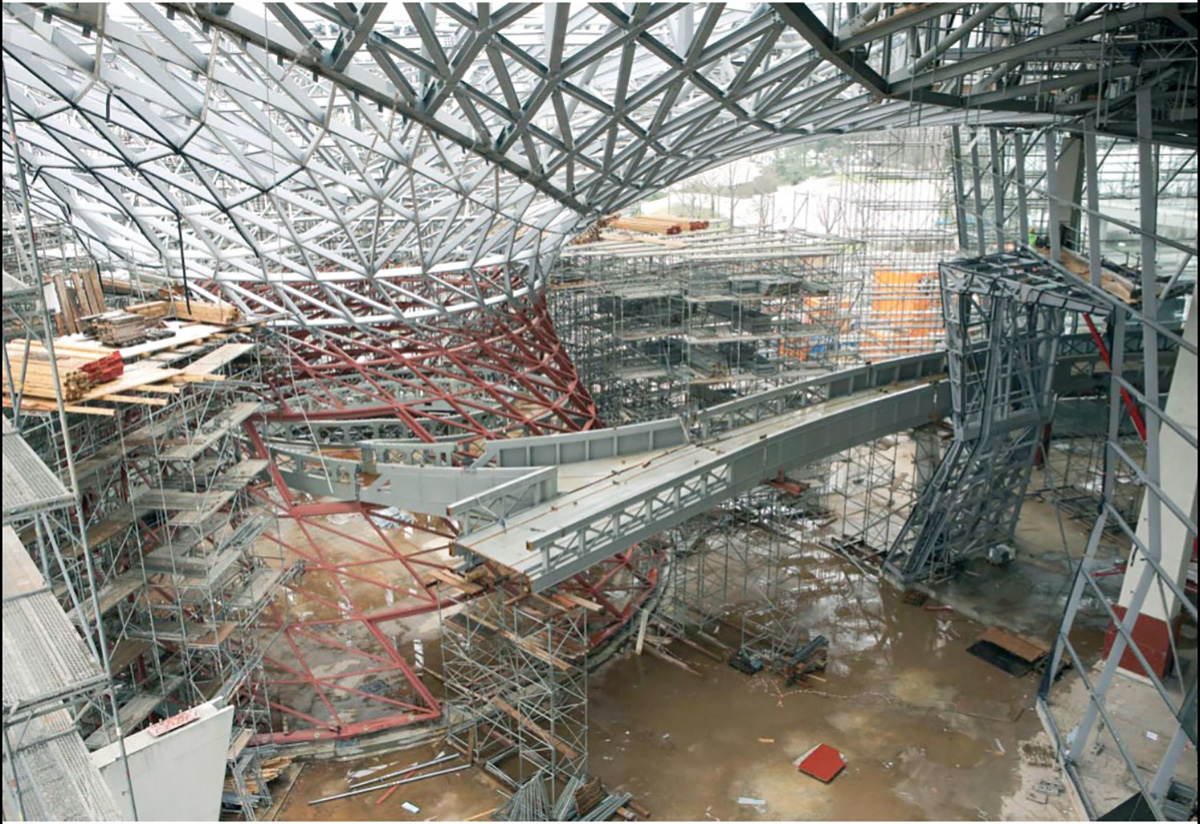 In the 20th century, the classification of structures according to defined building typologies was central to engineering design. Here Professor Klaus Bollinger, Professor Manfred Grohmann and Oliver Tessmann of design engineers Bollinger + Grohmann challenge this preconception.

By considering each structure as an individual case in point with inherently complex behaviour, they move away from the notion of a building being a variant of an established type.

They further discuss this mode of working, in relation to their own recent projects, in terms of relevant methods and generative techniques, as well as the respective consequences that it has had on the relationship between force, form and structural performance.

Digital model of the double cone and folded facade (above) indicating the behaviour of the structure under the influence of force (right).

Bollinger + Grohmann conceive of structure as an integral part of architecture. The overall performance of an architectural project results from negotiating and balancing a complex network of multifaceted, interrelated requirements. 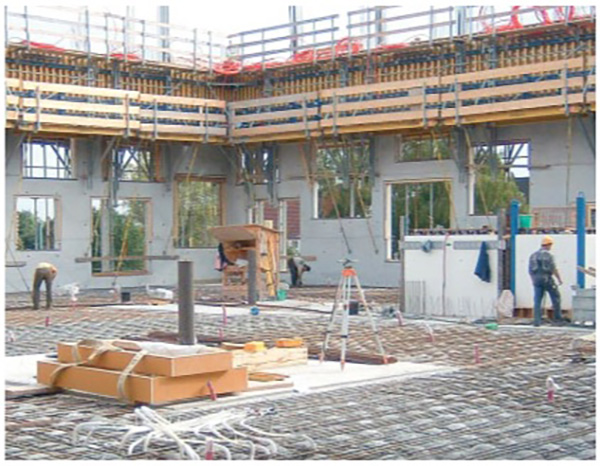 SANAA, School of Management and Design, Essen, Germany, 2006 The void formers and thermal activation pipework in the concrete slabs, as well as the active thermal insulation of hot-water pipes cast into the concrete of the external walls, are still visible during the construction process.

As the design of structure is just one aspect within such a network of manifold relations, the appropriate structural systems cannot be found through single-parameter optimisation. The specific forms derived through such a multiparametric design process need to be analysed in order to identify zones of favourable structural performance.

Digital structural analysis showing the main moments (left) and membrane forces (right) within one of the external walls perforated by a large number of rectangular openings.

The related structures adapt their load-bearing capacities to the form and its particular local forces. Thus the resultant structures are highly specific, differentiated systems rather than variations of a defined typology. 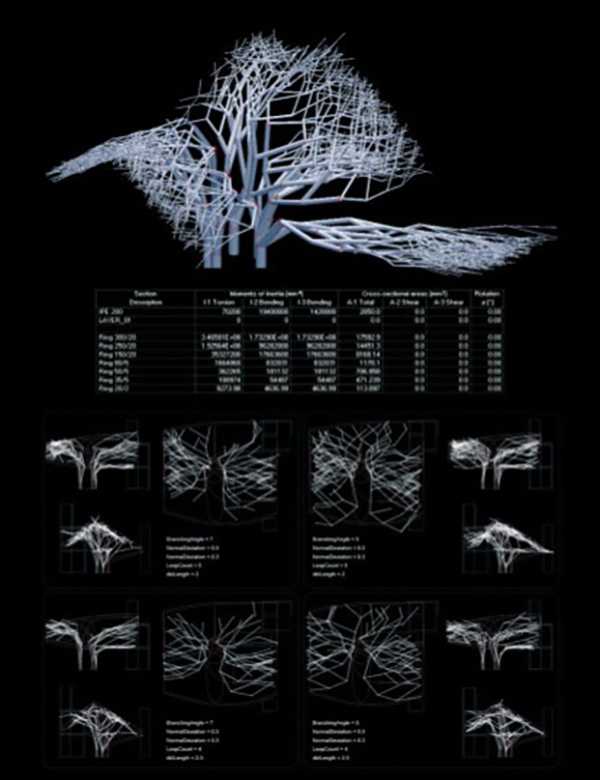 ArchiGlobe, Lakehouse Patagonia, Argentina, 2007 Different versions of the Lakehouse structure are derived by a generative digital process driven by stochastic as well as arithmetic parameters.

The structures we develop do not need to adhere to idealised typologies, which are usually in conflict with the architect’s concepts anyway. Rather they result from a multiparty design process. In the BMW Welt project by Coop Himmelb(l)au, which is located right next to the Olympic quarter and adjacent to the BMW head office and plants in Munich, the complex roof structure was designed in a collaborative process.

From a structural engineering perspective one particular challenge proved to be the geometric complexity of building elements and their interaction, as each local change had consequences on the global scale of the system.

This high level of interdependency needed to be integrated in the analytical models of the structure, which required, for example, the set up of an extensive model of the complete roof structure including all load-bearing elements. 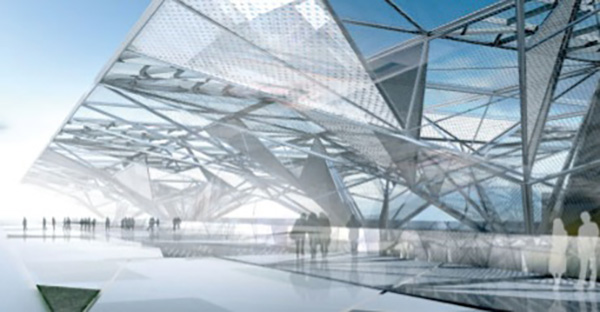 Any significant change to the stiffness of one of the cores, for instance, had considerable repercussions for the overall behaviour of the structure necessitating the re-evaluation and recalculation of the overall system. Consequently, this elaborate, iterative design process depended entirely on intense collaboration with the architects and related, clearly defined protocols of data exchange.

Bollinger + Grohmann focus on integrating material capacities and anticipated forces within the digital design setup, replacing merely geometric description with models that represent the dynamic equilibrium of a network of building services, and structural and architectural parameters.

Analysis of the specific load-bearing behaviour of each individual branching structure derived through the evolutionary process.

The Lakehouse Patagonia project by architects ArchiGlobe is an extension of an existing house in Argentina. The design process focused on developing spatial articulation through a roof structure that intrgrated functional and load-bearing characteristics.

Based on Lindenmayer systems, a scriptdriven procedure generates a tree structure in response to the specific design context. The growth of the structure reacts to architectural criteria such as spatial volumes and views, and to structural aspects.

The structure’s gradual change in density interacts with the open space to create varied spatial qualities and atmospheres. The algorithmic process is implemented in the architect’s design environment as a generative tool capable of deriving a large number of design iterations. Variation is driven by random modifications to parameters that influence the branching angle and branch length.

Computational processes enable us to generate and evaluate a large number of possible structural articulations. During the design study for an underground station roof at Piazza Garibaldi in Naples by Dominique Perrault, entire populations of structures were evolved and individuals were selected through predefined architectural and structural fitness criteria. These processes evolved articulations in response to specific criteria without relapsing into a priori defined typologies. 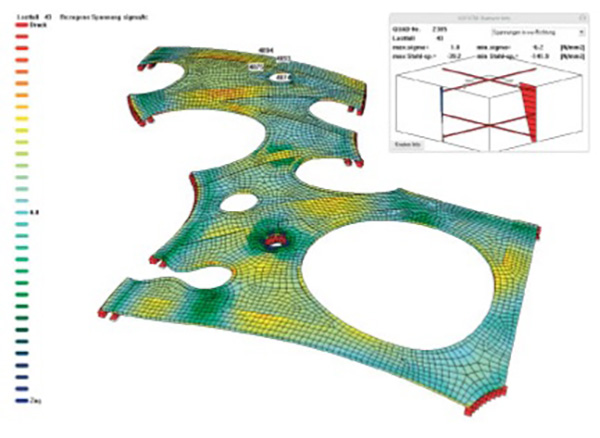 Visualisation of the distribution of tension forces within the landscape-like structure.

These evolutionary strategies depend on the fitness ranking, as selection constitutes the only control mechanism to direct the development. In nature individual fitness is evaluated on the phenotypic level as the likeliness for further reproduction.7 Likewise, in digital processes each individual structure needs to be fully defined and modelled in order to be evaluated. Each evolved structure is based on the genetic information of a previous generation and has undergone further adaptation.

Thus the definition of the fitness criteria is critical for the quality of the building and its structure in that they control the direction of the evolving process. Our goal is the integration of such criteria for many different nodes within the complex network of requirements, to achieve performative and differentiated buildings and structures.