Parametric architecture (parametric design) emerged as a concept or theoretical idea in the world of architecture around 2008, in parallel with the development of digital design tools and the rise of the new communication technologies that have spread widely in recent years, supported by the digital revolution.

Many research attempts have thus been made to deal with parametric design, with interest focusing both on defining it as a philosophical and theoretical concept in contemporary architecture and as a new architectural style with specific characteristics; it may also be considered an architectural movement, or a set of techniques for the production of form at the design and implementation levels.

Many attempts have also been made to define it in order to promote teamwork through collaboration between architects and other engineering specialists during the design process. This paper discusses the possibility of achieving multiple such goals by defining the notion of parametric architecture; the research problem is thus the lack of clarity of the concept or the idea of the style in terms of formal characteristics as a result of over-rapid adoption of the methods and techniques of parametric design.

The research aim is to discover and explain this idea more fully, demonstrating its difference from conventional concepts of style, by comparing it with the concept of the international style that emerged based on modern architecture theories, techniques and methods during the first half of the twentieth century. 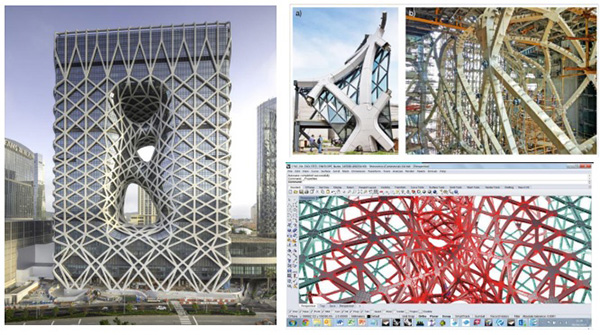 Figure 3. a) Morpheus Hotel front elevation view. Picture credit: Ivan Dupont On the left, working with the envelope in the parametric software (Rhino+ Grasshopper) Upper left showing the complexity of the form.

To achieve this, the paper presents a set of global experiences illustrating the use of digital design technologies in different stages of production, highlighting the final characteristics of the products and what they have in common. Schumacher’s dogmas and the taboo principles were thus adopted in an attempt to develop this comparison with the international style that emerged from the theories and implementations of modern architecture, and to investigate the role of modern technologies in producing its forms.

The paper ends with a general conclusion that demonstrates the possibility of presenting parametric architecture and its products globally as a second international style, though currently in the stage of formation, as its fundamental principles are based on the idea of renewal and revolutionary rejection of all that has preceded it; thus, the repetition of these attempts results from dealing with the same theoretical principles and standards imposed by the techniques that produced the contemporary architectural form.

Figure 4. Dome of the Louvre pavilions in Abu Dhabi, 2015 designed by Jean Nouvel

Parametric design is a concept that has been supported by the increasing availability of computeraided techniques and the development of manufacturing processes which facilitate the achievement of complex forms. Parametric design as an approach relies on defining variables: whenever a parameter changes, the results change as well.

It has thus been used in recent decades as part of computational design to support the design process and achieve unique design products. Working parametrically has changed architectural practice in many ways, as it transforms all programming decisions into design decisions and thus increases the need for architects to learn new skills in order to master new techniques. It is also an approach that offers alternatives throughout the design process, causing the design process to emerge as a continuous, rather than discrete, process.

Parametric design also aims to identify the design process limitations found in conventional design tools by establishing relationships between different parts of designs based on the ability to edit and manipulate these relationships by observing and selecting from the results of changing them. Thus, the approach requires new skills and encompasses new strategies to achieve its goals, thus changing architecture theoretically as well as in practice.

In 2008, Schumacher presented the concept of “Parametricism” for the first time in his paper “Parametricism Manifesto”. He introduced both ways to follow this concept, entitled Dogmas, and things to avoid, known as Taboos in both and and in his book published in 2011. Within his paper entitled “Parametricism as a style: parametricism manifesto”, the dogmas were basically concerned with the principles used in creating forms (interarticulating, hyperdizing, and the uses of splines and NURBS) and using scripts rather than models, while the taboos included the use of platonic objects, straight lines, right angles and, other familiar topologies.

Parametric architecture as a style does not fit within the traditional understanding of styles, but rather encompasses a concept that aligns it with the international style developed in modernity. Parametricism, as the heir to post-modernism and deconstruction, was preceded by many trends and thoughts in architecture, one of which was the rejection idea, Jencks, in “The architecture of the jumping universe”, examined the need for new architecture to represent the cosmic meanings emerging in the new worldview and the realities represented by sudden developments.

This can be done by linking architecture with the science of complexity and cognitive sciences. However, Zaha Hadid rejected the concept of gravity when producing her floating architecture, and the rejection concept in parametric architecture was expanded to reject architectural history and even the idea of international style, rejecting that which preceded it.