We propose a modeling method based on rationalizing curved folding in order to find the form variations of 1DOF origami mechanism. We interact with a physical paper model of curved folding and then discretize a curved folding by identifying and fixing the rulings. 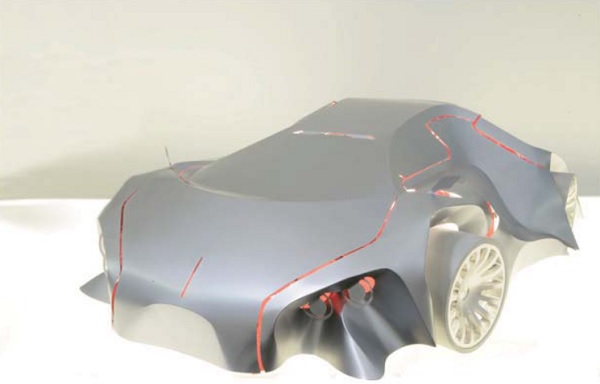 The discretized form is a rigid origami structure with at most one degree of freedom. The form adjustment follows the discretization so that it is sure to realize a mechanism. The workshop performed by the authors based on the proposed design method is reported. 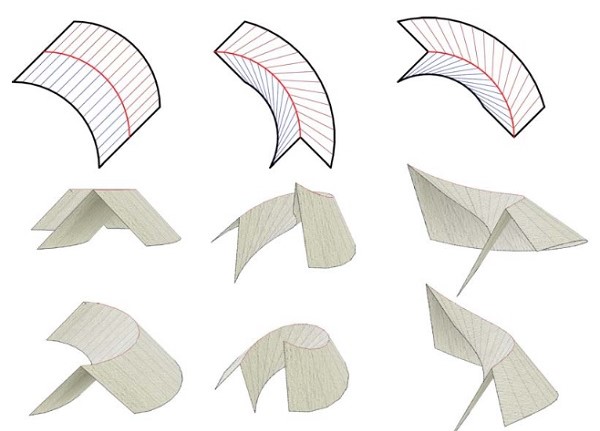 The objective of the workshop was to utilize the 1DOF characteristic of discretized curved folds as a constraint in the design of dynamic architectural components. The results showed the feasibility of the method and suggested a novel methodology for designing.

However, the design of such components is morphologically poorly investigated field. This can be attributed in part due the challenge imposed by an extra dimension (time) apparent in the component design.

Fig. 7: The elastic transformation with the change in the rulings position (Bending only).

Our objective is to add more design freedom in such components so that we can explore variations of multi-functional, contextmatching, high-performance, efficient, and super cool-looking designs.

In order to design such a kinetic structure in a relatively big scale, it is useful to use geometric method that requires no or few material deformation in order to achieve the overall transformation. Two major geometric approaches for achieving mechanical structures are 1) to use bars and rotational hinges to construct scissors mechanism, e.g., the works of Santiago Calatrava and Chuck Hoberman; and 2) to use plates and hinges to form polyhedral surface linkage with a synchronized motion, i.e. rigid origami.

In this paper, we focus on the designs of the latter, since they have an advantage over the bars and hinges mechanisms in the sensethat they can form a kinetic watertight surface; a watertight surface is suitable for partitioning architectural spaces. However, unlike the bar linkage models, the form of rigid origami structures is heavily constrained, and it is has been very hard to find really useful design solutions.

There have been studies of rigid origami for forming kinetic surface such as Miura-ori, Ron Resch’s Pattern, and Chuck Hoberman’s designs. Especially, mechanisms based on a quadrilateral mesh such as Miura-ori produce 1DOF synchronized motions. This implies that the whole structure transforms by asserting force to a part of the structure. 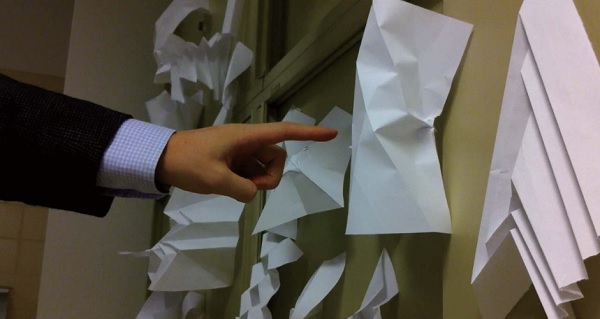 Recent studies generalize theses structures to achieve further design freedom. Tachi proposes computational design methods to obtain variations of miura-ori-like quadrilateral mesh structures while preserving their flat-foldability and rigid-foldability. However, since this method uses continuous transformation from one pattern to another, the achievable forms are restricted by the initial patterns, the finding of which is still an important yet unsolved problem.

In order to find the form variations of 1DOF rigid origami, we propose a modeling method that combines physical curved folding and computational design method. We have performed a workshop [6] based on this approach. The results demonstrated that the method is feasible and useful. This also suggests a new paradigm of design methodology.

Even though each of these smooth patches only makes relatively simple form, the existence of creases make the surface freely configurable, enabling globally non-developable complex surface, e.g., approximated hyperbolic surface and elliptic surfaces, the sculptures by David Huffman, the early computer graphics works of Ron Resch, and product designs by Gregory Epps.