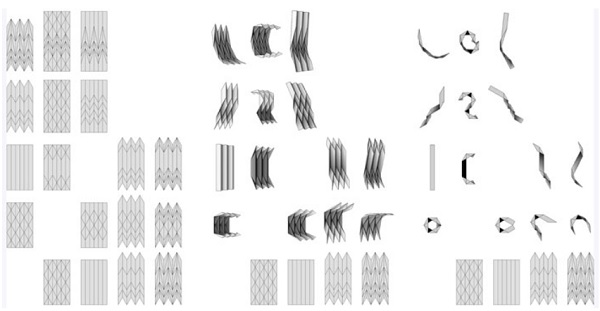 In the range of projects that define the digital avant-guard of the 00s, the notion of surface maintains its overall form generating function and gains rigor through the accelerated growth of digital fabrication techniques.

Advances in architectural geometry, an interdisciplinary field currently emerging at the border of differential geometry, computational mathematics and architectural design and engineering, (Pottmann 2007) provide solutions for the actual construction of architectural free-form surfaces, segmenting the overall surface into simpler parts, a process also known as panelization.

In most experimental digitally generated projects since the mid 00s, surface becomes an integrated aggregate or a ‘synathroisis’ of non-standard components that facilitate overall architectural substance, each component requiring relatively simple fabrication procedures.

The concept of surface as synathroisis2 pertains to an assemblage of monads that individually express the common logic of the group, explicitly articulated within a computational system. The emphasis lies in the design of selfsupporting, material efficient patterns that populate the surface allowing parametric part-to whole interrelations. 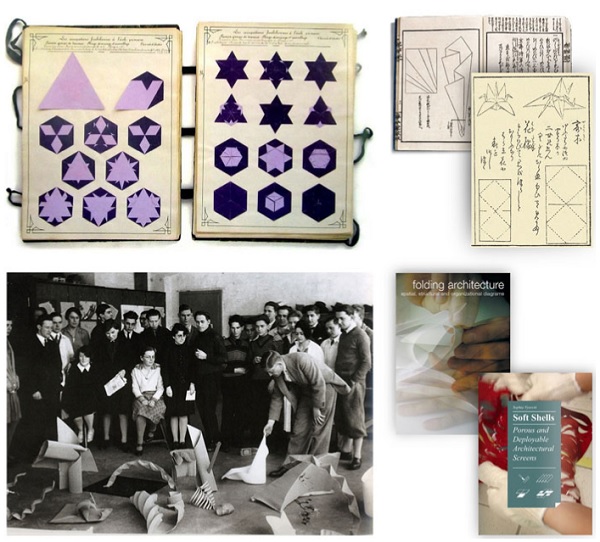 Surface division into a population of elements seamlessly fitting together comprises a tessellation. Our research hypothesis revisits a retro mode of tessellating, the geometry that originates in Origami, the ancient Japanese art of paper folding, in the context of the evolving computational design and fabrication methods.

Origami tessellations are not uncommon in 20th century architecture. As the overview of paradigmatic projects developed in the next section makes evident, Origami tessellations in architecture are most usually encountered as static structures, folded plate shells, with applications as large spanning roofs, load baring walls, or combinations of both.

In this essay we also explore the impact of tessellating upon the kinetic behaviour of lightweight architectural surfaces focusing upon geometric transformations of architecturally relevant Origami patterns – the Yoshimura, the Miura, the fishbone and standard pleats.

We test the effect of pattern geometry upon the surface’s kinematics and distinguish between two generative processes: (a) 2d pattern transformations based on repetition, arrays, and serial variability, and (b) profile generated patterns that are constructed from a desired section and further manipulated through generative modelling.

Within the context of digital fabrication advances architects are concerned both with tectonics of assembly and with synthetic surface and material effect resulting to intricate patterns through the aggregation of building materials (Iwamoto 2009).

Iwamoto (2009) classifies folding as one of the state of the art digital surface fabrication techniques. Certainly as a method for digital fabrication folding entails the development of three dimensional components into two-dimensional patterns ready for cutting by lazer, water-jet or plasma cutters.

While geometric development in two dimensions has been employed in pre-digital tectonics, arts, and crafts it is today largely facilitated by software.

The pre-digital unfold or crease pattern which traditionally required intensive geometric calculations can be easily achieved in modelling software – by the unroll or smash commands in Rhino and employing applications like Pepakura Designer. 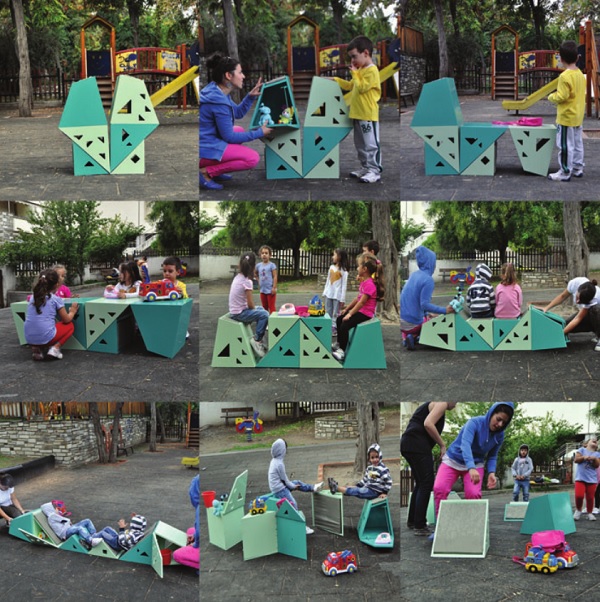 Despite the fact, the design generative potential of folding has been neglected in computational architecture during the past few years.

In this paper we intend to revisit the design generative potential of folding, by embedding it within advances in digital modelling, exploiting its digital fabrication facility and enhancing its performance potential.