Figures 01 and 02: Completed Möbiusbank (left) and the group of participants (right).

Over the past decades we witnessed a tremendous shift in the principles of architectural design based on the advancement of digital aided design and manufacturing (CAD and CAM). By now the possibilities to simulate the structural capacities of truss structures as well as surface structures within a 3d-modeling environment have become convenient – not least through karamba; a finite element add-on fully embedded in the parametric environment of grasshopper for Rhinoceros.

This paper will give a comprehensive description of the project with a particular focus on the structural optimization and its implementation into the development of the design.

Predefined and decisive was however the material. Our industry partner supplied us with their micro mesh reinforced high-performance concrete DUCON® – which stands for DUctile CONcrete. It is characterized by its high ductility, gained through its reinforcement of mats of micro mesh that are evenly distributed throughout the entire cross-section. To allow the concrete to flow into every last corner, a concrete with a high flowability is used; which is self-leveling and self-compacting as well.

In order to push the limits of the material we aimed to create an ultra thin and freely formed geometry. The project ‘structural surface’ was both a research project as well as an educational attempt. Seeking to design, execute the detailed planning and build a structure by students within one semester is a huge challenge on one hand, but fuels the students’ motivation extraordinary on the other hand.

Figures 05, 06 and 07: Fabrication of formwork and reinforcement – milling of PU-foam with a 3-axis CNC router (left), coating of the formwork (middle) and tailoring of the reinforcement (right).

Realizing a structure doesn’t allow hiding or blurring any unsolved details and therefore offers the possibility to learn about aspects of the profession not dealt with in conventional design studios. The work in a team is a further valuable experience.

Figures 08, 09 and 10: Casting – mixing the concrete under laboratory conditions (left), infiltration (middle) and one of the six elements in its formwork while curing (right).

Our research agenda did comprise two major objectives. With regard to the computational design process, the ambition was to develop and test strategies for embedding multi-parameter simulation and optimization approaches into an early, conceptual design stage.

With a general interest in form active structures, easy to use computational tools should provide the feedback for informed decision making. Instead of contrasting form finding vs. form generation we want to promote the idea of informed form generation.

With regard to fabrication, the objective was to expand the existing processing procedures of the material DUCON® when joining prefabricated elements. A fully rigid joining technique was developed, tested and implemented in the final construction. An in-depth description of this novel technique can be found in Eisenbach et al. 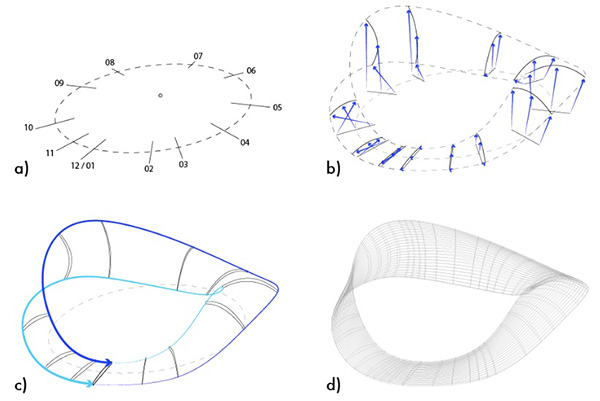 Figures 12: a) Initial ellipse around center point with twelve section curves. b) The three control points of each section curve are numerically translated. c) Sections as profiles with adjusted thicknesses that are swept along two rail curves. d) 3d model of the Möbiusbank.

Optimization is facilitated only through simulation and evaluation. We consider optimization not solely as a post-design strategy to improve one or multiple aspects of a given design, but rather as a design strategy in itself.

Procedures that incorporate optimization of one or multiple criteria tend to be iterative and non-linear. A parametric model of the structure, i.e. a digital model that is based on adjustable values or parameters, is a necessity in order to conduct any computational optimization.

For parameterization we used grasshopper, the graphical algorithm editor fully integrated into the 3d NURBS modelling software Rhinoceros. Structural analysis and optimization were conducted with the finite element add-on karamba.

Figure 17: Möbiusbank after cross-section-optimization. Local stress peaks in proximity to the supports cause undesirable discontinuities in the surface geometry.

The parametric model of the Möbiusbank was set up the following way: The overall geometry is based on an ellipse, which in turn is generated from a center point and its radii in X- and Y-direction. Twelve curves, each defined by three control points, are arrayed along the ellipse in specified intervals. By translating their control points, according to numeric parameters, the section curves are positioned.

Figure 18: Minimum material thickness in designated areas, defined after verification of the karamba results with a RFEM analysis.

Sweeping the twelve section curves along two rail curves at their start- and end-points creates a Mobius strip as a single surface. When the section curves are replaced by section profiles with a specified thickness, a 3d model of the actual Möbiusbank is generated when sweeping them along the rails.

Figures 19 and 20: Tailoring the micro mesh reinforcement – digital evaluation of curvatures and analysis of deviation when unrolling segments (left) and the physical testing of findings (right).

First and foremost we have to emphasize, that the project ‘structural surface’ was extremely successful as an educational experiment. The students’ motivation was fueled by the possibility to actually build their design. Despite the tight schedule, the group managed to realize the demonstrator whose form generation was informed via means of simulation and optimization. The Möbiusbank stands as a proof of concept for this innovative design approach.

Technically the incorporation of fabrication constrains as design parameters and / or realms for simulation and optimization is an interesting future research domain. The limitations of our in house 3-achsis CNC-router influenced for example the segmentation pattern of the object – admittedly not as part of any computational process. In particular the automation of cutting patterns for the micro mesh reinforcement can be considered as a promising field of further investigation. Initial attempts to use curvature analysis for the tailoring of planar raw material for double curved shapes were very promising.