Towards a Free-form Transformable Structure 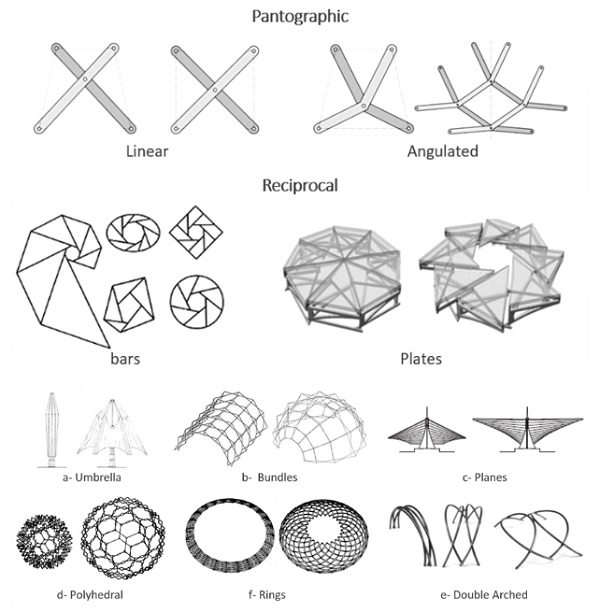 In continuation of our previous research (Hussein, et al., 2017), this paper examines the kinetic transformable spatial-bar structures that can alter their forms from any free-form geometry to another, which can be named as Free-form transformable structures (FFTS).

Since 1994, some precedents have been proposed FFTS for many applications such as controlling solar gain, providing interactive kinetic forms, and control the users’ movement within architectural/urban spaces. 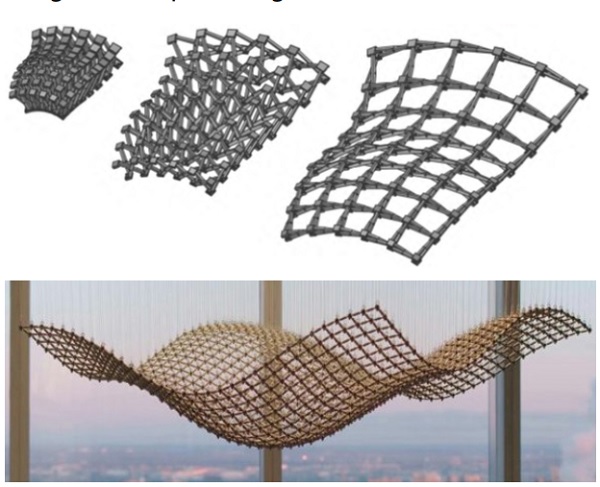 This research includes a comparative analysis and a critical review of eight FFTS precedents, which revealed some design and technical considerations, issues, and design and evaluation challenges due to the FFTS ability to deliver infinite unpredictable form variations.

Additionally, this research presents our novel algorithmic framework to design and evaluate the infinite form variations of FFTS and an actuated prototype that achieved the required movement.

The findings of this study revealed some significant design and technical challenges and limitations that require further research work.

Figure 5 Forms that can be achieved by FFTS as described in this research.

Transformable systems in architecture are defined as the systems that can “alter their forms to have different spatial configurations to be employed for spacesaving and utilitarian needs” (Fox & Kemp, 2009).

Figure 6 The possible transformation of free-form surfaces: a) expandable; b) supported by another structure; c) supported by its ends, which is the scope of this research. 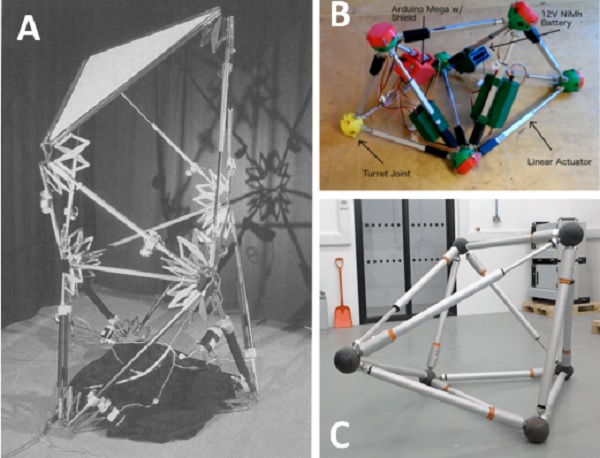 Spatial-bar structures mostly share the same features of space trusses; they are composed of linear elements (i.e. bars or struts) assembled in threedimensional configurations and flexible joints at the ends or intermediate points of these elements (Asefi, 2010; Hoberman, 2006), covered by flexible materials (e.g. PTFE) or lightweight panels (e.g. Polycarbonate) (Gantes, 2001).

Figure 10 Transformation of the HybGrid

The transformation morphologies of spatial-bar structures, according to Escrig (2010), have six typologies: ’umbrellas’, ’bundles’, ’rings’, ’polyhedral’, ’planes’ and ’double-arched. 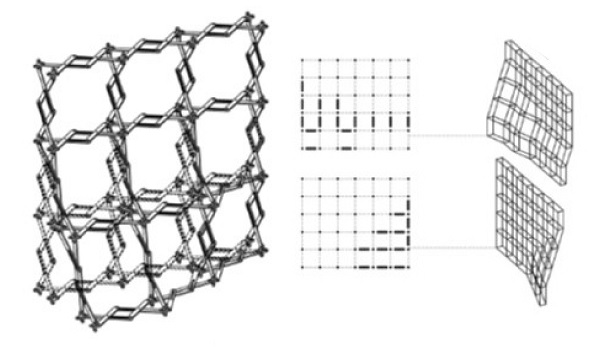 According to the mentioned classifications and the morphologies mentioned by Escrig (2010), it can be noticed that the possibilities of the form variations achievable by spatial-bar mechanisms are limited and based on the modification of primitive 3D shapes (e.g. box, cylinder) or platonic solids.

Figure 12 A 3D view for a pavilion with M-SLE

Additionally, spatial-bar mechanisms are not common in architectural applications; this can be for two major factors, their cost and complexity (Asefi, 2010).

Figure 15 A sample of the worst-case scenarios extracted from the GH script and the GA solver.

Despite their issues, spatial bar structures offered sophisticated architectural solutions, such as the works of C. Hoberman (figure 2-d&f) and Santiago Calatrava.

Moreover, recently, some designers attempted to extend the possibilities and morphologies of spatial-bar structures. For instance, C. Hoberman (2015) developed a ‘kinetic block’ that can achieve foldable free-form geometries.

Figure 17 Some of the form variations achieve by the FFTS prototype.

Additionally, other prototypes were developed to create interactive free-form surfaces, such as the HypoSurface (Dunn, 2012), and the kinetic sculptures of Reuben Margolin.

Finally, some precedents attempted to create transformable free-form structures that alter their forms from a free-form geometry to another, which is the scope of this research.