Figure 1. ESO made famous by optimizing towards an apple shape

The paper explores the possibilities of using Structural Optimization Tools (ESO) digital tools in an integrated structural and architectural design in response to the current needs geared towards sustainability, combining ecological and economic efficiency. The first part of the paper defines the Evolutionary Structural Optimization tools, which were developed specifically for engineering purposes using finite element analysis as a framework.

The development of ESO has led to several incarnations, which are all briefly discussed (Additive ESO, Bi-directional ESO, Extended ESO). The second part presents result of using these tools in structural and architectural design.

Actual building projects which involve optimization as a part of the original design process will be presented (Crematorium in Kakamigahara Gifu, Japan, 2006 SANAA‟s Learning Centre, EPFL in Lausanne, Switzerland 2008 among others). The conclusion emphasizes that the structural engineering and architectural design mean directing attention to the solutions which are used by Nature, designing works optimally shaped and forming their own environments.

Figure 3. EESO in action, from initial design space to final solution for a bridge structure

Architectural forms never constitute the optimum shape derived through a form-finding process driven only by structural optimization, but rather embody and integrate a multitude of parameters. It might be assumed that there is a similarity between these processes in nature and the presented design methods. Contemporary digital methods make the simulation of such processes possible, and thus enable us to refer back to the empirical methods of previous generations.

The works created by Nature have been an inspiration for building forms since time immemorial. These forms have represented a kind of bridge between men and their natural environment. In the digital age, this bridge seems to be essential both for architects and scientists alike, and a diverse development of research interests concerned with new materials and technologies to re-inform the built environment has emerged.

The Nature can provide ‘models and processes for the creation of artificial systems that are designed to produce forms, and perhaps even real intelligence’. Today we learn from Nature about efficient energy and material management, we find effective engineering solutions and structural designs for new building materials. We also learn the ways in which the natural and built environments could best interact with each other connecting art and science.

Digital instrumentation of the evolution, morphogenesis and emergence processes, along with the proposed methods and techniques, provide a possibility of using these models in the architectural and structural design. It is a key concept, which is important both for the theory and methods of digital design. The interest of architects and designing engineers is increasingly focused on the use of Evolutionary Structural Optimization (ESO) in nonlinear shaping of structures. Their aim is to identify and expand the applicability of these methods in architectural design.

In the digital age architects and structural engineers often use ‘evolutionary’ design strategies and genetic algorithms to optimize structures and define shapes. Evolutionary Structural Optimization (ESO), was developed specifically for engineering purposes using finite element analysis as a framework. ESO is based on the simple idea that the optimal structure (maximum stiffness, minimum weight) can be produced by gradually removing the ineffectively used material from the design domain.

The original ESO method did not allow deleted elements to be restored. It differs as such from other optimization algorithms which were often based on a general mathematical approach and now have a wide variety of applications. ESO, on the other hand, is purely limited to shape optimization and has very straightforward principles guiding it. It is for this reason that the term ‘evolutionary’ is an inappropriate, perhaps incorrect adjective to denote this algorithm.

The research of natural structures and mechanisms conducted by multidisciplinary scientists has provided new ways of defining geometry and its behaviours. Even more exceptional than manufacturing considerations in structural optimization are actual building projects which involve optimization being part of the original design process. In these instances, ESO did not include manufacturing in an explicit manner, but was used as a tool during initial stages of design.

One of the first attempts to use ESO digital tools in architectural design was a project of a multi-space cultural and tourism structure called Illa de Blanes in the seaside town of Blanes (Costa Brava). It was executed in the years 1998-2002 by Isozaki & Associates with the help of a Japanese structural engineer Mutsuro Sasaki.

Isozaki created load transfer columns as a tree form using an optimization program starting with virtual block of concrete. The forms which were generated here, of a unique shape, were to become an icon of this seaside resort.

However, due to budgetary constraints, the work on the project has been suspended. A large seaside structure with mixed commercial, public and recreational functions was proposed, providing an attractive 75,000 m² of usable space. Besides organically shaped columns, the design also features a roof that was created using 3D Extended ESO.

Figure 10. Modelling the free-surface with the Rhinoceros software

The new train station project is 400 meters in length, 42 meters wide and 20 meters high. A roof encompassing this entire complex provides a huge lower space for facilities, while the roof itself is a landing strip for light aircraft. The design entry by Arata Isozaki features a flat roof, supported at several points by organically shaped columns, designed through the use of 3D Extended ESO.

The vision was that supports, with their shape resembling tree branches, would be made of reinforced concrete with a box profile. The project was not implemented because the entry won second prize and lost out to a different design by Norman Foster. It was only in 2008 when the project of The Qatar National Convention Centre (QNCC) in Doha was adopted for the implementation, when there was a real chance to implement this innovative structure.

Together with Buro Happold, an executive design was developed, in which the concrete construction has been replaced by a steel one. This design includes a giant structure resembling two intertwined trees to support the building’s exterior canopy. The forms are symbolic to reference the Sidra tree which is an iconic symbol in Qatari culture. 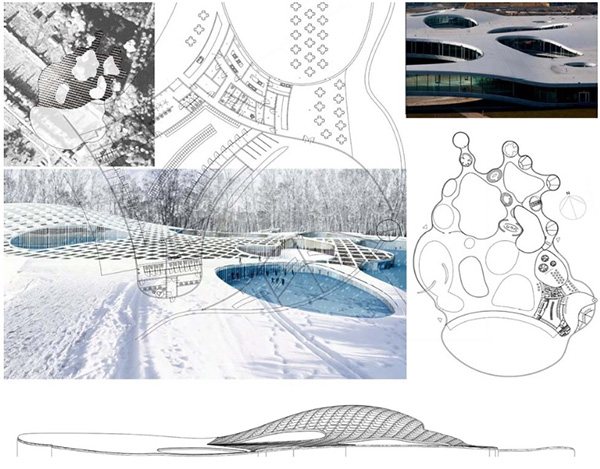 Architectural forms never constitute the optimum shape derived through a form-finding process driven only by structural optimization, but rather embody and integrate a multitude of parameters. It might be assumed that there is a similarity between these processes in nature and the design methods presented in this work. This can also be understood as an evolutionary method, one that is not limited by the availability of calculation and analysis methods.

In digital processes, each individual structure needs to be fully defined and modelled in order to be evaluated. Cognitive form, its tectonics and space, change the existing axioms of design. The full integration of structural engineering into the design process of architecture does not guarantee good architecture or revolutionary space and forms, but enables their potential to exist. Now more than ever, engineers are embracing the natural world and poetically exploiting its logic to realize architecture’s possibilities.