Concepts of swarm intelligence are becoming increasingly relevant in the field of architectural design. An example is the use of agent-based modeling and simulation methods, which can help manage the complexity of building designs that feature many similar, but geometrically unique elements.

Apart from leading to effective solutions and expanding the architectural design space, agent-based design methods can also be employed in integrated planning processes, in which the contributions of various disciplines take place in an integrated loop instead of being executed consecutively.

We propose a computational framework for architectural design, in which agents represent building elements and/or joints between building elements. Behavior parameters, behavior weighting, and the environment can be modified in real-time while the agent system is running. Additionally, the designer can interact with individual agents directly, while slowing down or pausing agent movement if so desired.

Fig. 4 Illustration of program execution logic. Solid lines indicate the order in which processes are executed. Dashed lines indicate input that does not trigger an update, but will be taken into account the next time a process is executed. When no changes are made to any behavior settings, behaviors will be calculated using the same settings as in the previous iteration

In the resulting design approach, the designer can globally adjust behavior parameters, while retaining local control over details where needed. To facilitate an integrative design process, domain-specific data and the results of external analysis can be included, either directly as input for agent behaviors, or by modifying the environment.

We illustrate the potential of this computational framework using the example of the design of plate structures and show how this method can lead to quantifiable results while also attaining aesthetic goals. Furthermore, we provide an outlook toward possible further extensions of agent-based design methods in architecture.

Fig. 7 Plate patterns resulting from various distributions of points on a base surface: When distributing plates on a surface using a regular square grid (left) or hexagonal grid (middle), the resulting polygonal shapes are irregular and structurally unfavorable: The continuous joint lines would constitute folding lines. The plates in the right image have been distributed using our agent-based approach and show a much more regular and structurally favorable distribution of plate sizes and edge lengths

Understanding principles of nature has been identified as an important skill for architects since the very origins of architecture theory (Pollio 1914; Laugier 1753). The idea of studying systems occurring in nature in order to be able to apply them in architecture and engineering has been reinvigorated in the second half of the twentieth century (Otto et al. 1982; Wester 1989). 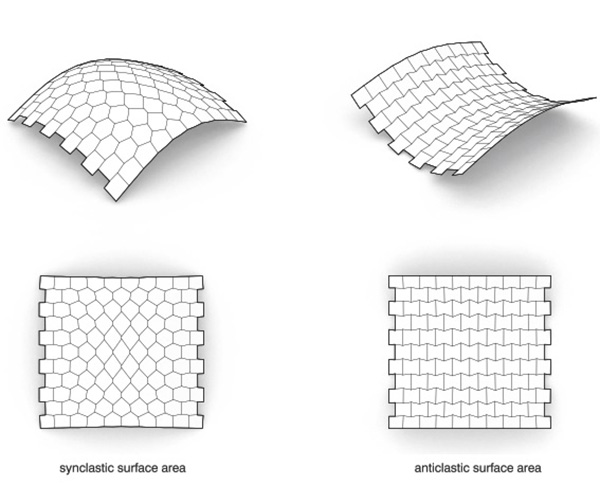 With advances in computational design and digital fabrication (e.g., through the use of industrial robots) (Krieg and Menges 2013), the study of complex systems that exhibit emergent behavior is becoming increasingly relevant for the field of architecture (Ball 2012; Vincent 2009). Through the development of computational methods that are inspired by biological systems (such as evolutionary design methods or agent-based modeling and simulation), new approaches to architectural design open up (Menges 2012). 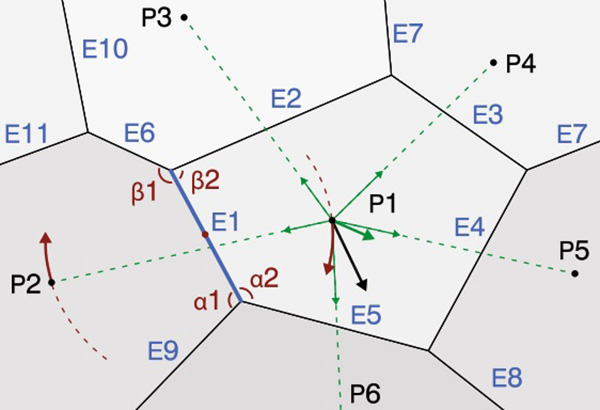 Fig. 9 Interaction of edge agents and plate agents using geometric behaviors: Edge agent E1 has a behavior (EAE, described in Sect. 4.5.5) that acts on neighboring plate agents P1 and P2 and tries to equalize angles α1 and α2, as well as β1 and β2 (drawn in red). Plate agent P1 has a behavior that acts on itself (LPSE, described in Sect. 4.5.2), based on the proportion between its own surface area and the surface area of neighboring plate agents P2–P6. The vectors that act on plate agent P1 (drawn in green) are summed (drawn in black) and then used to move P1 before the next iteration starts

The ability of complex adaptive systems (such as swarm systems) to adapt to varying conditions and accommodate change (Macal and North 2005) makes agent-based modeling a particularly suitable method for design integration and design interaction within a rule-based system. Properties of agent systems that are relevant in the context of architectural design include self-organization, adaptation, emergence, and the capacity to negotiate conflicting goals within one system.

Fig. 10 User interaction with an individual agent: A designer can select a plate agent (left) and move it to a new position (middle), which may result in changes in plate connectivity. After releasing the mouse button, behaviors assigned to the agent and its neighbors will act until equilibrium is reached (right)

Methods such as particle swarm optimization (PSO) (Kennedy and Eberhart 1995) and ant colony optimization (ACO) (Dorigo et al. 1996) aim to find an objective global minimum or maximum value within the parameter space of a function. Design tasks often involve negotiating large numbers of requirements, which suggests that PSO and ACO could be successfully employed. 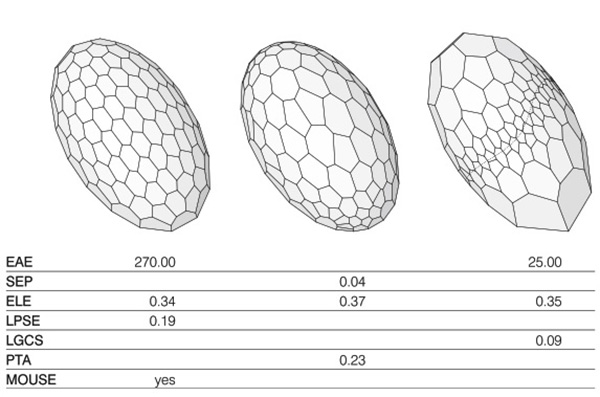 Fig. 12 Three different plate patterns based on a single base surface, and the behavior weighting settings at the moment the agent system was stopped. The separation behavior (SEP) is calculated according to Reynolds (1999), and the other behaviors are described in Sects. 4.5 (EAE, ELE, LPSE, LGCS, PTA) and 4.7 (MOUSE)

As demonstrated by Puusepp (2014), ACO can be effectively used for subtasks of design, such as circulation planning. However, as subjective decisions (including aesthetic judgment) often play an important role in design processes, design processes cannot entirely be carried out by optimization only (Takagi 2001).

In early design stages, objective functions can usually not yet be defined and the parameter space tends to change while the design process progresses. Therefore, instead of trying to automate and optimize design tasks, we focus on the development of interactive tools that assist a designer during the design process.

In this paper, we focus on subsequent developments in our research on agent-based modeling and present a framework for agent-based architectural design and planning that integrates a large range of planning aspects (such as structural analysis and life cycle analysis, as well as prefabrication planning).

It enables a design feedback loop, in such a way that steps that are normally taken sequentially are integrated with earlier phases of the planning process. Our implementation allows user interaction while the agent system is running, thus creating an interactive design environment. We demonstrate this environment with a case study of polyhedral plate structure design. 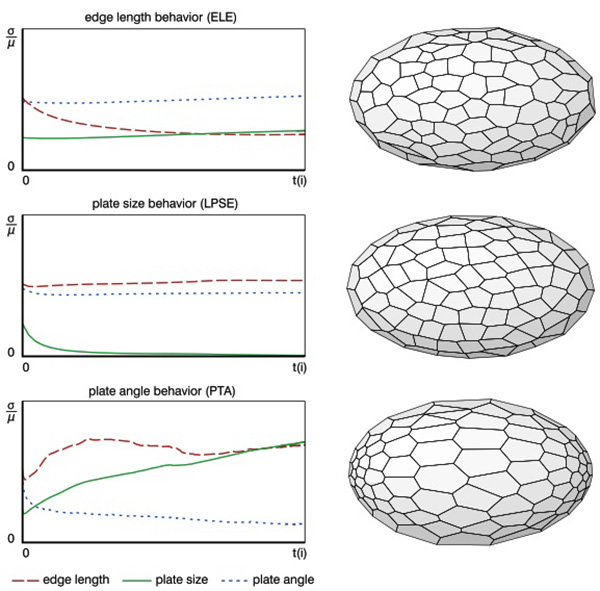 This paper introduces a software framework for agent-based design that extends previous work (Schwinn et al. 2014) and is well-suited for the design of building systems that consist of families of geometrically unique elements. Improvements on previous work include a more interactive workflow, more flexible definitions of agents and behaviors, support for heterogeneous agent populations, and more direct integration of data sources and external analysis software.

Fig. 15 Four steps in a process in which the designer interactively adjusts plate agent positions executed while multiple agent behaviors (EAE, LPSE, ELE, PC) were active. The colors indicate the number of sides of the polygons

The agent-based design approach we propose differs qualitatively from conventional design approaches: Instead of drawing geometry directly, the designer creates and controls behaviors that generate geometry. Because of near-instant visual feedback, the designer can quickly develop an intuitive understanding of the behaviors. The designer can also interact with agents directly, for example by manually adjusting their position.

In addition to visual feedback of the agent configuration, the agent system provides data that can be displayed graphically. Thanks to the integration of domain-specific data (such as life cycle analysis) and external analysis software (such as FEA), designers can evaluate designs rapidly.