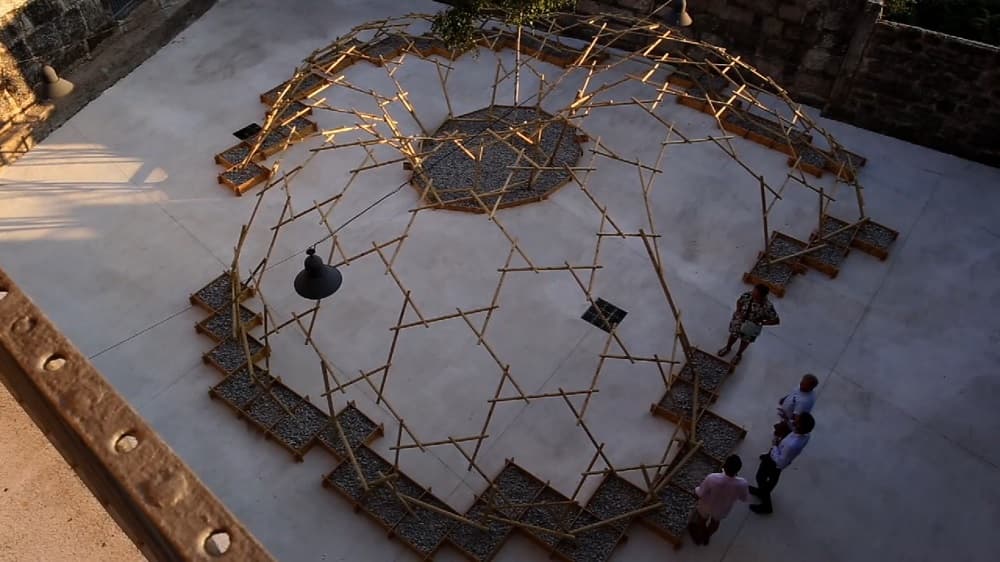 In this architecture project we are taking a look at the reciprocal frame architecture as an example for the architecture design section. The name ‘reciprocal frame’ comes from Graham Brown, who developed this type of structure in the UK. Graham used ‘reciprocal’ because of the way the beams mutually support each other. In the Oxford English Dictionary the word ‘reciprocal’ has several meanings:
● Mathematical – so related to another that their product is unity
● Adjective – in return (for example, I helped him and he helped me in return). 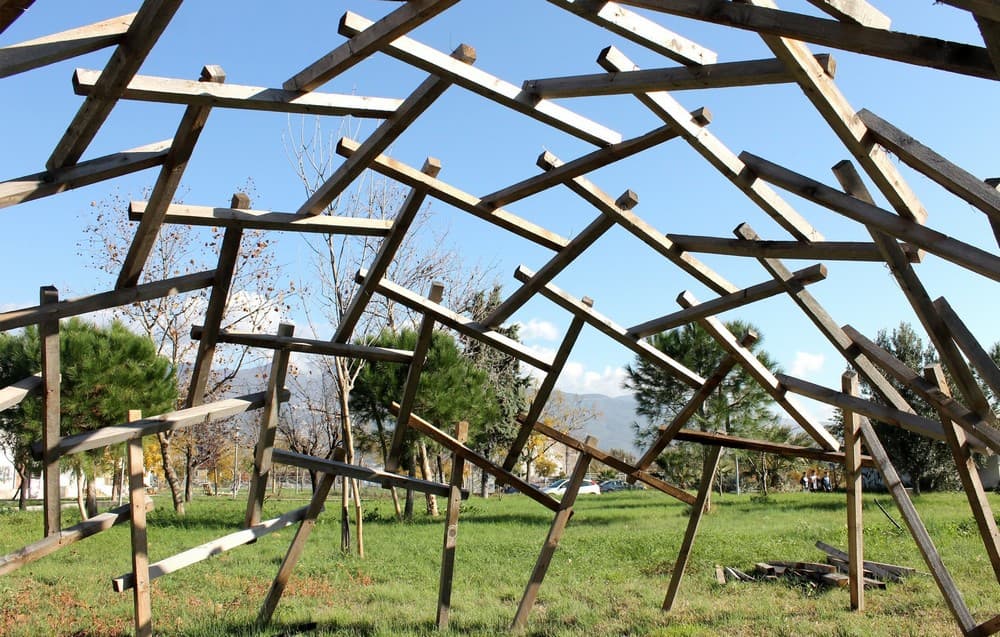 In our context, it represents the appearance and behaviour of the unified structure in which each beam supports, and in turn is supported by, all of the others. Because of the geometrical characteristics of the structure, the most appropriate forms of buildings (in plan) using the RF are circular, elliptical and regular polygonal. As a result, so far most of the buildings constructed using the RF have regular polygonal or circular plans. In the case of regular plan forms, all RF members are identical, which gives the possibility of modular RF construction. 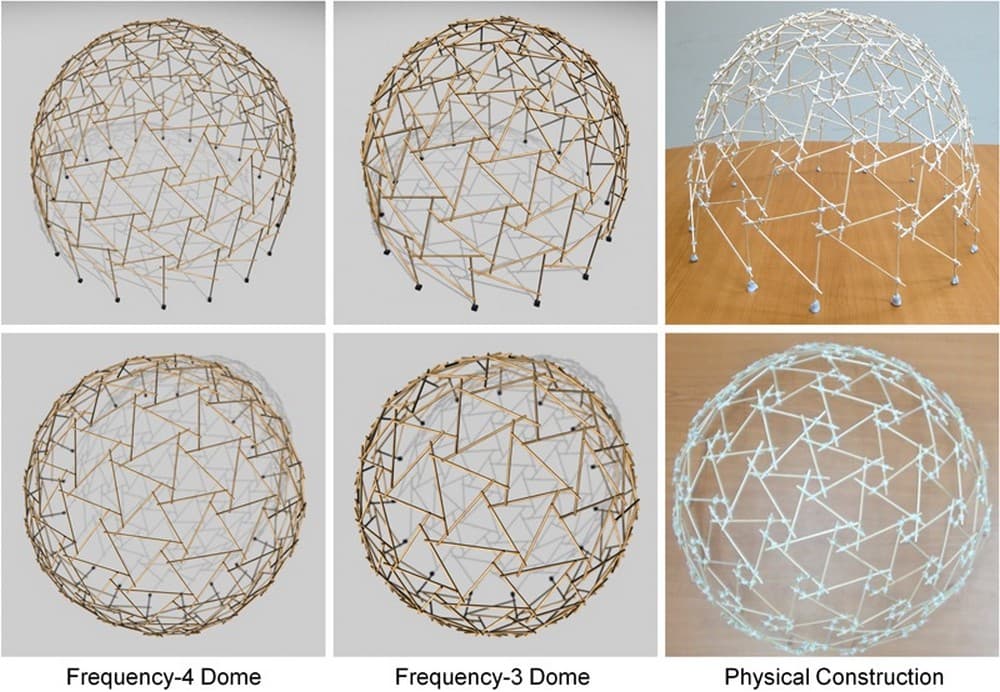 The circular plan form was one of the first used. Many vernacular buildings throughout human history (mud huts, cave dwellings and so on) had approximately circular plan forms. They would appear to have a protective, womb-like quality. Also, circular and regular polygonal forms are typical in buildings of major significance, such as churches, concert halls, sports stadia, museums and the like. 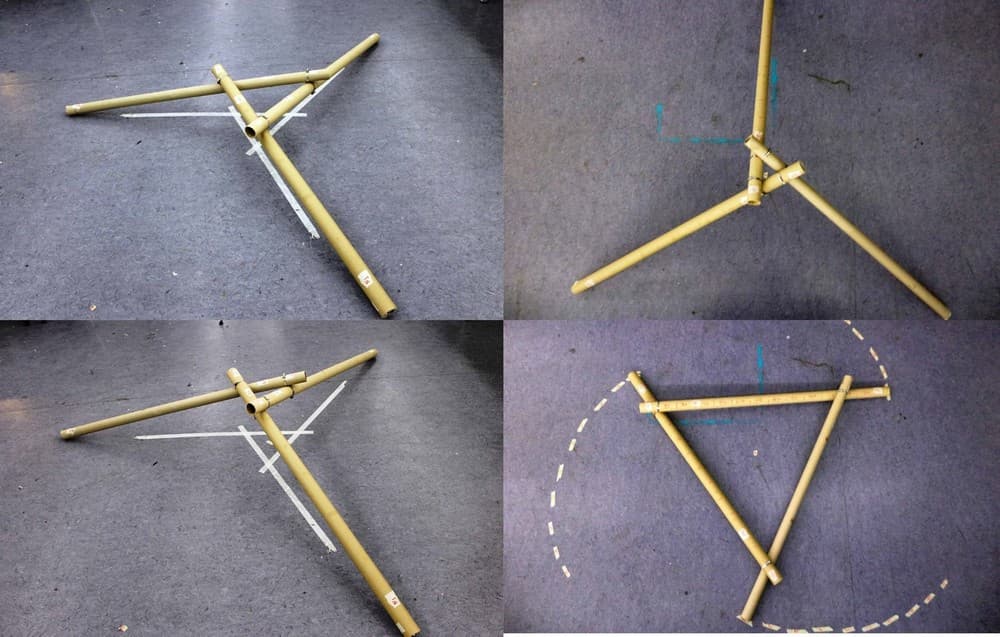 If suitable materials are used for the main RF members, such as reinforced concrete, glued laminated timber, steel beams or trusses, the RF could span short and long distances with equal success. Because of the most common plan forms, polygonal and circular, the organization of the function and division of the internal spaces of the RF buildings are different from buildings with rectilinear plan forms. Since no internal supports are needed, the RF forms a very flexible architectural space. 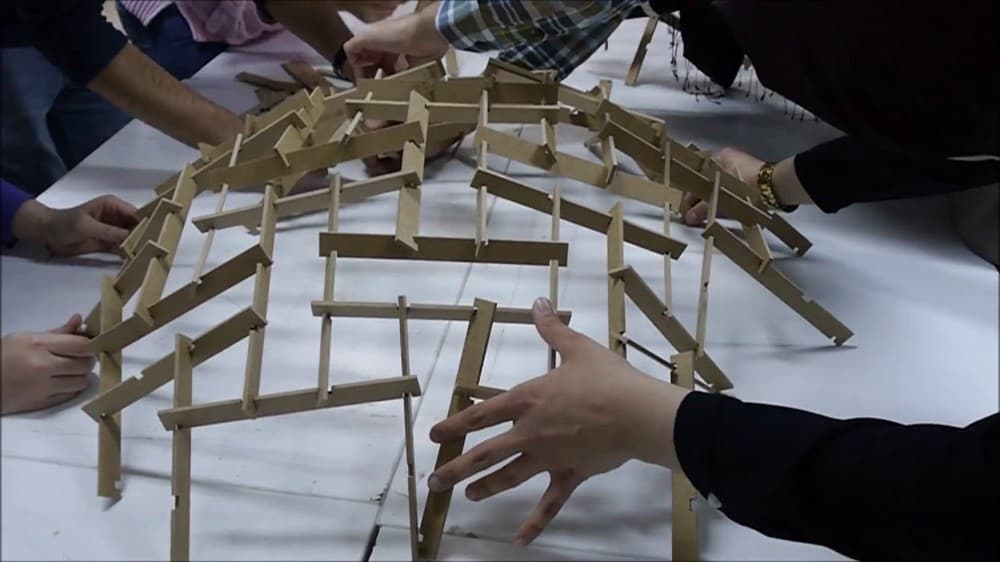 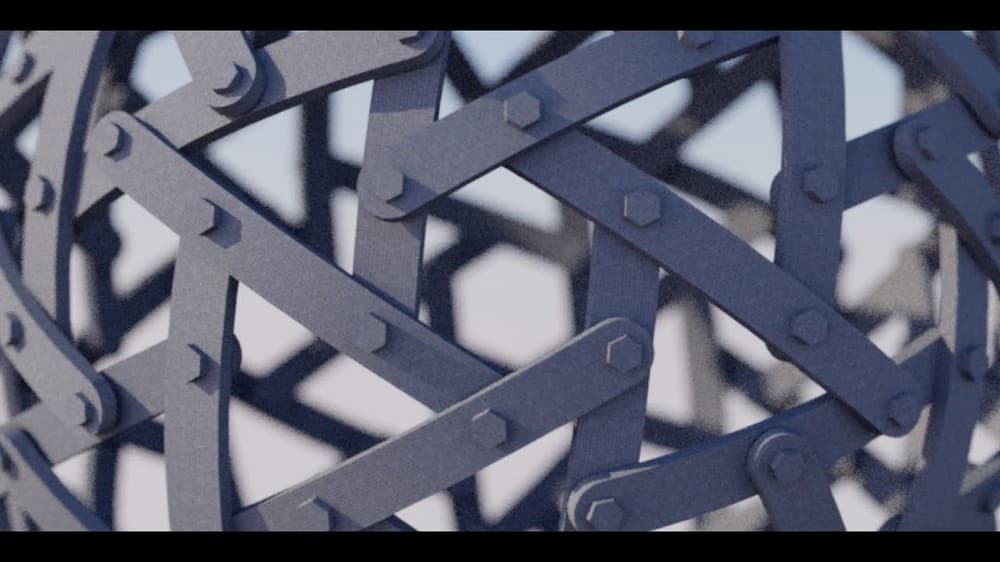 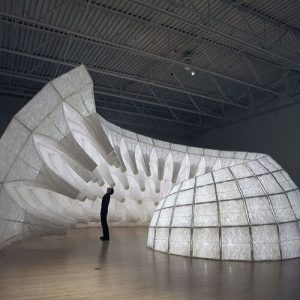 John Grade the Seattle based artist created this pavilion named “Capacitor”. The sculpture changes its luminosity by a controller that gets its information from sensors on the roof of the building. 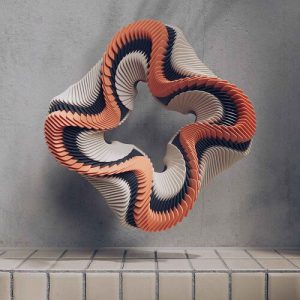 Flourishing by James Owen, a study of light, shadow, form, and function. Built on the basic principles of trigonometry and a simple mathematical formula. 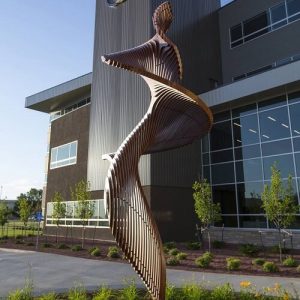 Lyle London is an artist and sculptor. Over the last few years, he has developed a series of works based on the spiral topologies observed in natural phenomena. 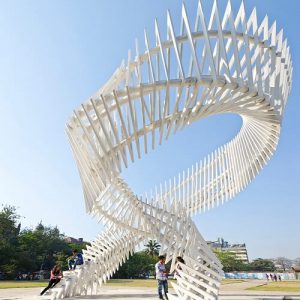 Flexible Landscape by GOA Architects, an installation in the Jing'an Temple Square which is both artistic and practical. The installation is understood as a set of open landscape in this site, and looks like a bonsai of the city, getting involved with a soft and light profile. 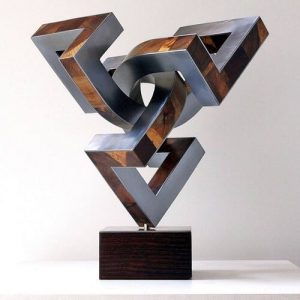 Nikolaus Weiler is living and working as a freelance sculptor in Berlin since 1993. The focus of his work is the creation of all-dimensional sculptures. 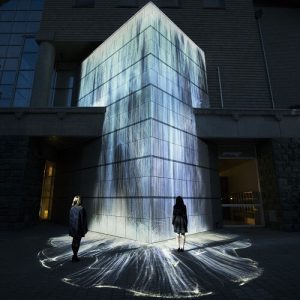 teamLab reproduced the Bunkanomori Park building in 3D in a virtual three-dimensional space. The movement of water was then simulated as if it was a waterfall flowing over the shape of the building. 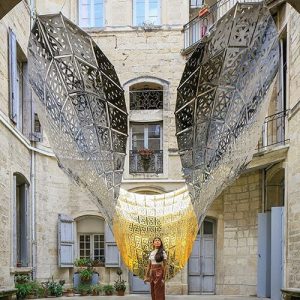 Designed by Cristina Nan, Dirce Medina Patatuchi, and Carlos Bausa Martinez, ‘Papillon D’or’ is made from golden dichroic holographic mirror vinyl, which refracts light and offers various experiences of the installation depending on the vantage point. 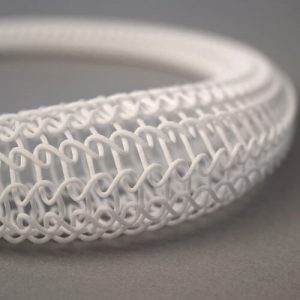 Knit Necklace is an extension to Knit Series of earrings and bangles by Monocircus. The design accentuates the unique 'knitted' structure resulting in a fascinating one-of-a-kind necklace. 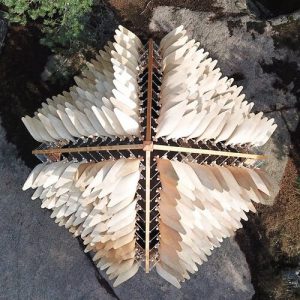 Shiver House by Neon Studio is a radical reinvention of the common Finnish Hut (mökki). The project is a kinetic “animal like” structure which moves and adapts in response to surrounding natural forces. 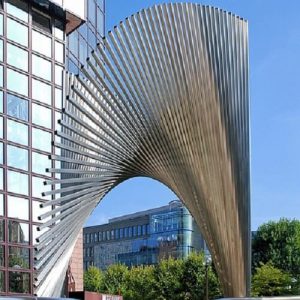 Andreu Alfaro Hernández was a A self-taught artist, he was related to the Valencian artists collective Parpalló Group (1957), and influenced by constructivists, such as Constantin Brâncuşi or Antoine Pevsner and by Jorge Oteiza. 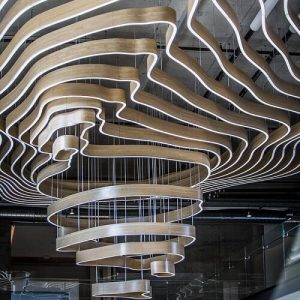 Contours by Acrylicize is a site-specific light installation sitting at the heart of Tableau Software’s Seattle HQ, exploring themes of nature and discovery in a nod to the data visualisation techniques Tableau is famed for. 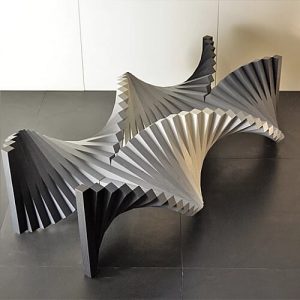 Simon Young designs and produces bespoke furniture. Twist is one element repeated to form an object, in this case a helix, and then repeated again to form a useful object, such as a table base. 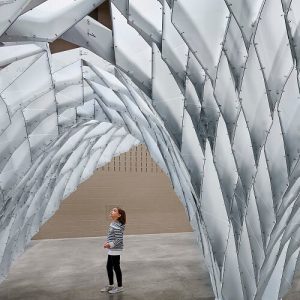 This pavilion is a 11-foot, steel vaulting structure known as Caret 6. Designed by OTA+ principle Kory Bieg and his 2013 design-build studio from the University of Texas’ (UT) Austin School of Architecture... 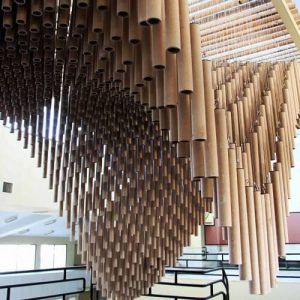 Pavilion Number 2 designed by MSA team at the University of Mazandaran in December 2017 which is now hosted in Kermanshah Iran. 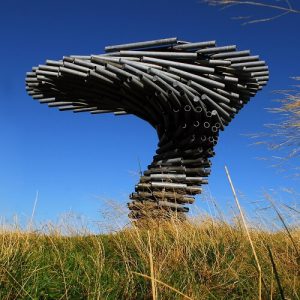 The Singing Ringing Tree by Tonkin Liu is a musical sculpture standing in the wind on a hill overlooking Burnley. 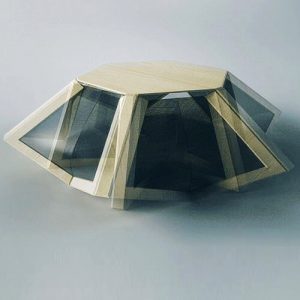 MIT Self-Assembly Lab has come up with an active design for a table that can reconfigure into various shapes. Manufactured by Italian brand Wood-Skin, the prototype of this self-assembling table was showcased at Milan Furniture Fair. 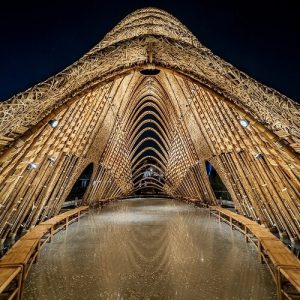 Taiwan-based Zuo Studio has woven a Bamboo Pavilion that curves majestically over a water body in Taichung. Located in Huludun Park’s fourth section and conceptualised for the Taichung World Flora Exposition. 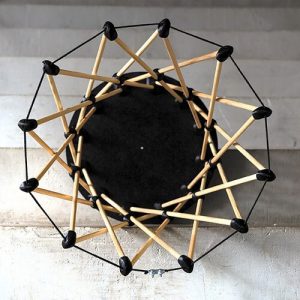 The shukhov stool by Anna Strupinskaya & Alexey Ivashkevich celebrates the visual style of the heritage Radio tower known as the Shukhov Tower in Moscow. 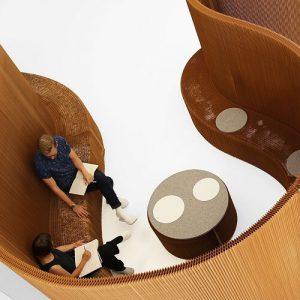 Benchwall by Molo Studio, is a flexible, paper or textile bench with a tall backrest that acts as both acoustic space partition and seating. It is a modern furniture concept which can stretch into straight, high backed seating or sweep into a spontaneous circular meeting room. 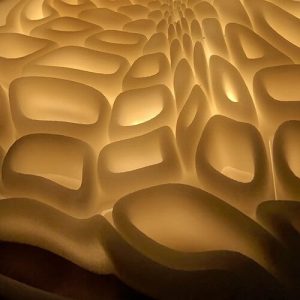 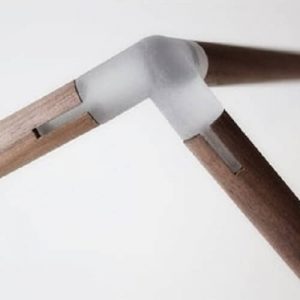 The Asterism projects by PATHfab serve as working prototypes for adapting any number of geometries into architectural, structural or furniture systems through the use of parametric strategies. 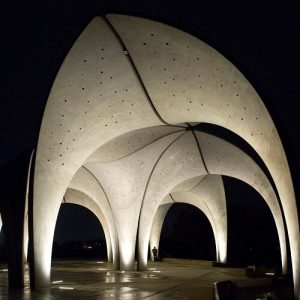 BHP pavilion by Matsys Design, is composed of 22 concrete “petals” that form a network of vaults that provide shade and direct the flow of rainwater into an underground cistern used for the park’s irrigation. 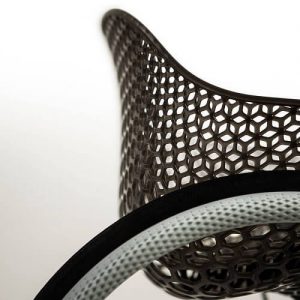 Designed in collaboration with Layer/Benjamin Hubert and Materialise, the GO was the result of two years of research, a wheelchair designed with a 3D-printed resin seat and TPU suspension sitting upon an aluminum insert.