Digital modelling of deployable structures based on curved-line folding

Figure 1: The folding process of various crease patterns is demonstrated, with the open state shown in the upper row and the folded state in the lower row. The folding motion is controlled by the bending of the central area of the models.

Most applications of curved-line folding only make use of the end state of the folding process: a static solution obtained through folding along a curved crease pattern. However, the elastic deformations that occur when a flat sheet is forced into a curved shape can produce an interesting transformation process.

Figure 2: On the left, a conceptual presentation of Gregory Epps’car design) and on the right the same car as a composition of patches of ruled surfaces. Planes are indicated in yellow, cylinders in green, cones in red and tangent surfaces in blue.

When one surface area is bent, the forces and moments are transmitted through the curved creases to the adjacent surface areas, which results in a folding motion. As a result, this kind of transformation process could be used for the development of a new type of deployable structure, finding its application in the context of kinetic shading systems.

The aim of this paper is to give an overview of how this transformation process can be modelled and analysed in a digital environment. Existing methods as well as some new approaches are discussed and evaluated. A distinction is made between pure geometrical modelling methods and simulations with finite elements software.

It can be concluded that the existing tools for geometrical modelling of the folding process of deployable structures based on curved-line folding are sufficient to quickly check the deployment of different curved-line folding patterns and can find their application in the early design stage. However, for a more profound analysis, which takes into account material properties and forces, a calculation with finite elements is required.

When a very thin material (like paper) is folded along a curved crease, a 3D shape is obtained by folding (plastic deformation) as well as bending (elastic deformation) of the sheet. This principle is called curved-line folding and has been discovered by students from the Bauhaus in the late 1920’s, as explained in Demaine et al.

Until now, most applications of curved-line folding in architecture only make use of the end state of the folding process. Starting from a flat sheet of material three-dimensional shapes with a geometrical stiffness are obtained, finding applications in sculptures, façade components, furniture etc.

Figure 5: Conceptual design of kinetic shading system based on a curved-line folding pattern. The Kingkong plugin was used to simulate the folding of the model and to test different façade compositions.

Accordingly, the plastic deformation present at the fold lines is permanent and the artefact cannot return to its initial state. However, the authors of this paper believe that curved-line folding can also be used for the design of deployable structures, by use of the elastic deformations that occur when a flat sheet is forced into a curved shape.

Figure 6: A discretized curved-crease pattern folded by means of Kangaroo and the Origami component.

As one surface area is bent, the forces and moments are transmitted through the curved creases to the adjacent surface areas, which then results in a folding motion. Figure 1 shows how the elastic deformation of the paper model’s central area, generated by pushing the ends towards the centre, forces the adjacent areas to fold inwards. 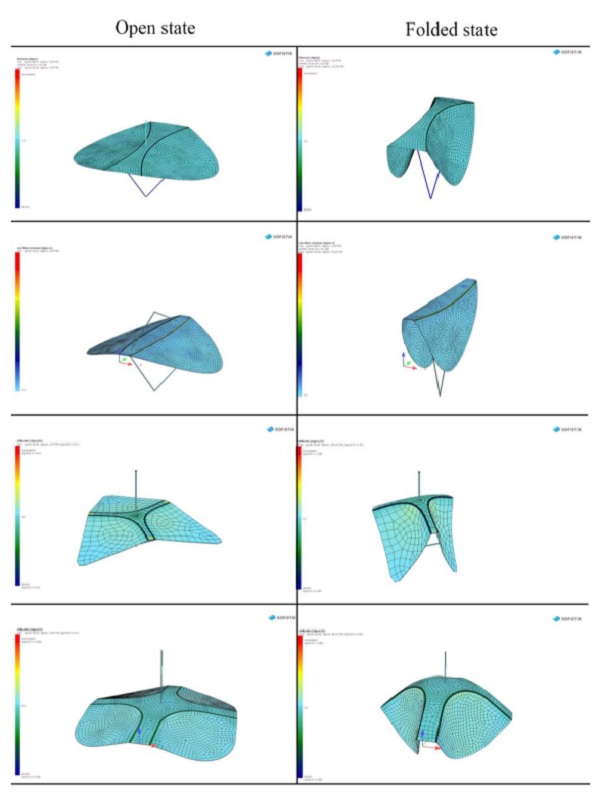 Figure 7: Simulation of four different curved crease patterns. The initial state (after pre-bending) is shown on the left, the compact folded state is shown on the right.

In Schleicher et al this phenomenon is referred to as bending-active kinetics and shows great potential for application in the design of adaptive façade shading systems. This paper gives an overview of existing methods and tools to simulate the folding process of curved-line folding patterns in a digital environment.

Besides tools that allow digital modelling based on the geometry alone, the authors also present a method using FEM simulation software. This method allows the designer to consider real material properties, actuation forces and boundary conditions when designing a deployable structure based on curved-line folding.