A new classification of deployable structures 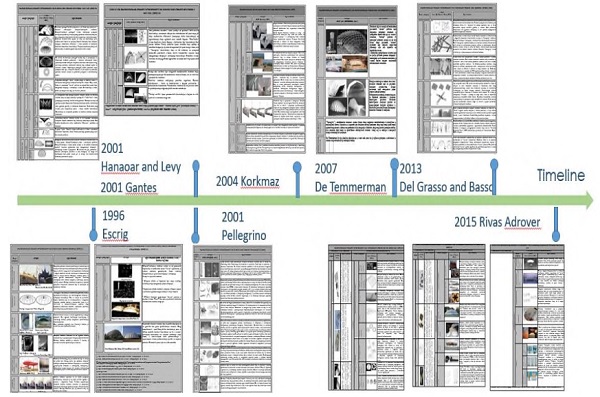 Fig. 1. Review of previously made classification presented in the unified tables.

Deployable lightweight structures are studied in the disciplines of architecture, civil engineering, aerospace engineering, mechanical engineering and other fields of their application. The research into these structures in individual fields resulted in a large amount of data sorted out by numerous classifications.

The previously made classifications proposed by different authors are presented in this paper by the usage of reasonably unified tables that enabled a direct insight into the essential characteristics of these structures, their analysis and mutual comparison. 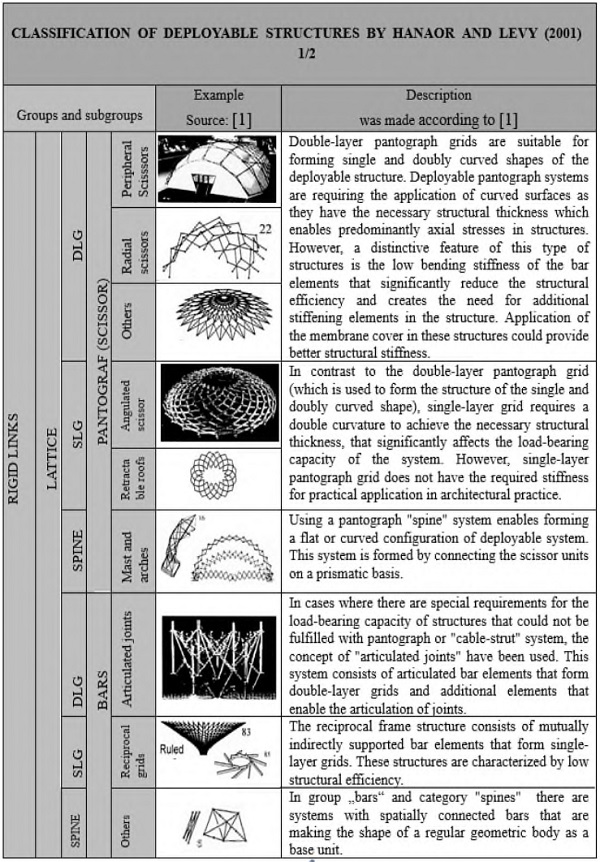 Table 1. Classification of deployable structures by Hanaor and Lavy (2001) – (part 1/2). Note: All illustrations and descriptions in this table were used from.

One of the results of these analyses is the proposal for the unified classification given in a separate table in this paper. The results of interdisciplinary studies have been collected into a unified classification which could be applied for the research in different scientific fields, presenting the basic types of these structures, including individual elements and details with their characteristic features.

The proposal of the unified classification of deployable structures is made according to the application of the basic elements used for structure forming.

The suggested classification, with the review of the results of the present research, is a significant starting point for the scientists in different disciplines and it provides a detailed insight into the studied characteristics of these structures. 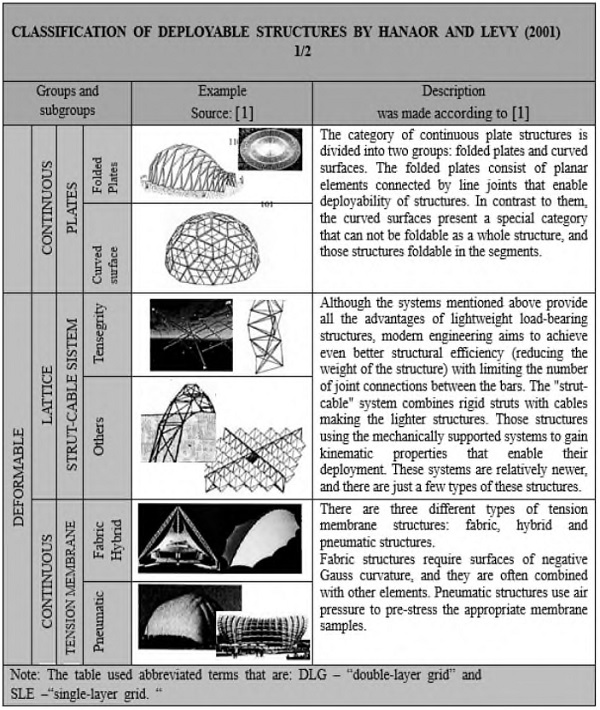 Table 2. Classification of deployable structures by Hanaor and Lavy (2001) – (part 2/2 ). Note: All illustrations and descriptions in this table were used from. 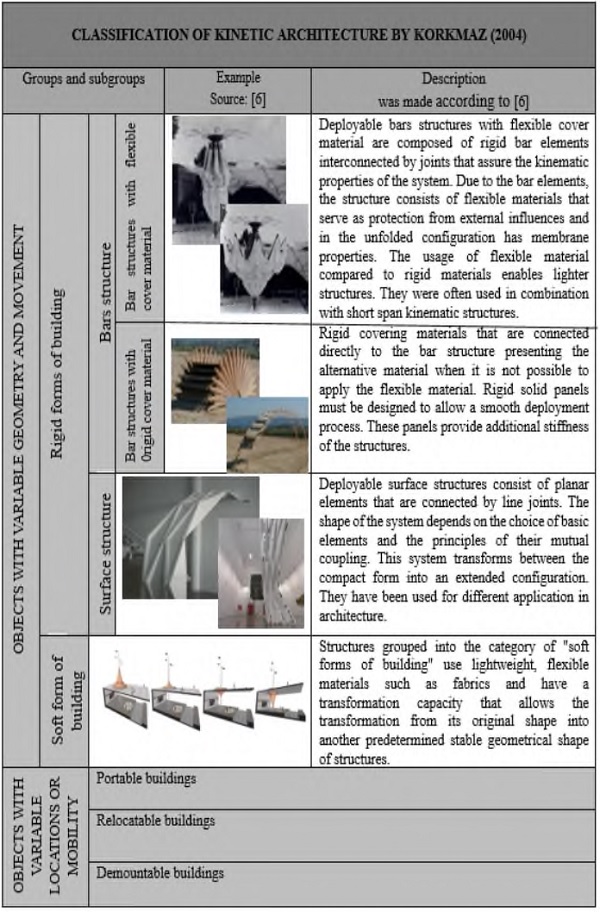 Table 3. Classification of kinetic architecture by Korkmaz (2004). Note: All illustrations and descriptions in this table were used from.

The research of these structures on the interdisciplinary level resulted in a large amount of data sorted out in different scientific databases, and that is why their grouping with precisely defined parameters and criteria is necessary.

These structures can be classified into specific categories according to different criteria such as type of structural element, the geometrical and kinematic characteristics of the structure, or by their application in particular areas of engineering.

According to the purpose of the classification system is to hierarchically present the principles that define the group of discussed objects. 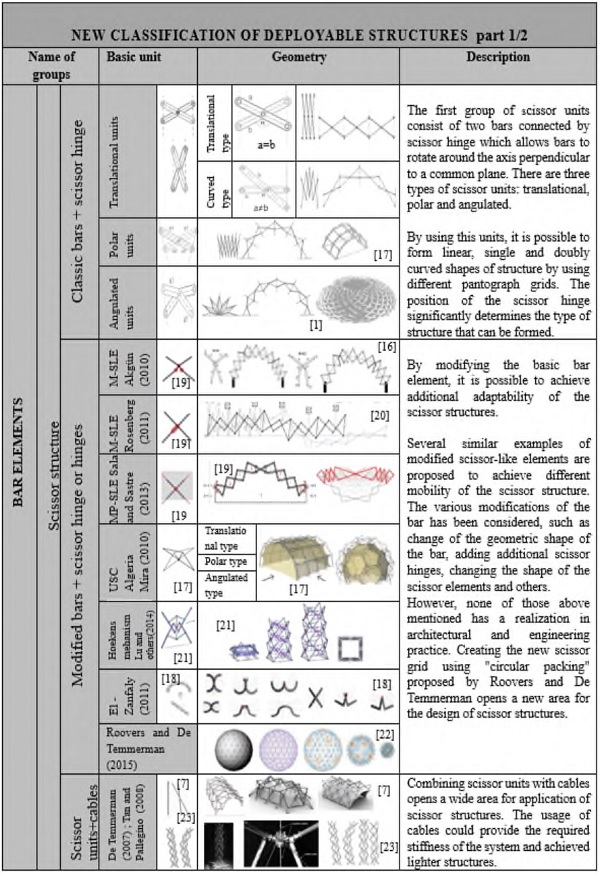 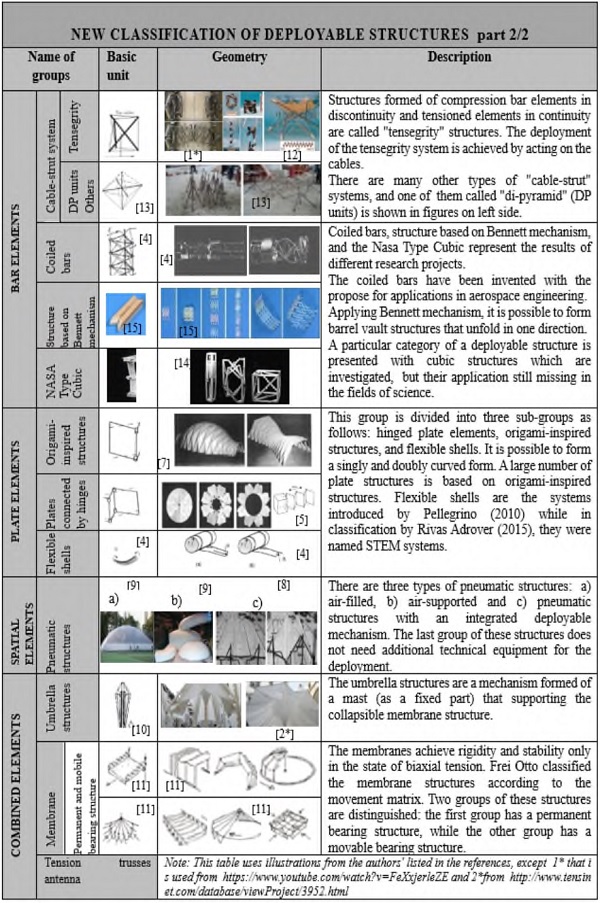 The progress in the field of deployable structures can be monitored by comparing the classifications suggested by Escrig and Rivas Adrover.

The most significant advancement of these structures can be monitored throughout the development of modern origami-inspired deployable structures or deployable tensegrity structures that are capable of changing configuration from the compact folded form into unfolded form by using specific mechanically supported systems. However, the potential for their application in the field of architecture has not been applied to the full.