From Typology to Topology

From Typology to Topology: Social, Spatial, and Structural

Structural engineering science radically transformed its ontology and methodology from a typological to a topological paradigm. This implies a radical reset of the categories that guide engineering practice.

Mies van der Rohe, National Gallery, Berlin 1968. The structure is a beam grid on 8 columns with hinge joints. In both examples the modern structural principles are clearly in evidence: Distinct system type, uniformity, decomposition into discrete elements with controlled load/force transmission at the joints. Yet another aspect of modern engineering becomes evident here: These principles owe their historical rationality as much to the Fordist fabrication logic of mechanical mass reproduction of standardized industrial elements like the I-beam.

The modern forms of engineering rationality based on system types are now exposed as inefficient while the rationality of older structural forms based on slowly evolved traditions is now revealed by the new paradigm.

Zaha Hadid Architects, detail of villa project, undisclosed location. This mushroom-like roof structure follows no standard structural system type. The integration of structural analysis via Finite Element Analysis during the design process allows for structural feedback during the sculpting process. The stress distributions and deformational impact is modelled and becomes dependent upon the differentiated sectional profile. This is a first step towards optimization. Here structural calculation is not reduced to identify critical points that determine the dimension of a priori forms but all points become potentially “critical” points.

These forms – like the Gothic Cathedrals – often offer higher degrees of efficiency that were not verifiable via calculations before the advent of the computational revolution in engineering science.

Zaha Hadid Architects, Phaeno Science Centre, Wolfsburg, Germany 2000-2005. Two structural systems – the waffle slab for the main floor and the vierendeel space-frame for the roof – are correlated via the structural cones as inhabitable mega-columns. Both systems are non-uniform subsystems, whereby the spaceframe is more subtly and extensively differentiated as the structural gridlines fan in both directions in adaptation to the trapezoidal global roof shape. Each cell of the vierendeel space-frame is thus unique and each member profile is individually sized according to the varied load conditions.

Beyond this revelation and recuperation of premodern more differentiated and integrated solutions we witness the proliferation of radically new forms that the new paradigm makes possible.

This radical expansion of structural possibilities – mirroring the endless forms of nature – is congenial with the requirements of contemporary architectural design where a much higher degree of versatility is required to meet the challenges of a much more complex society. 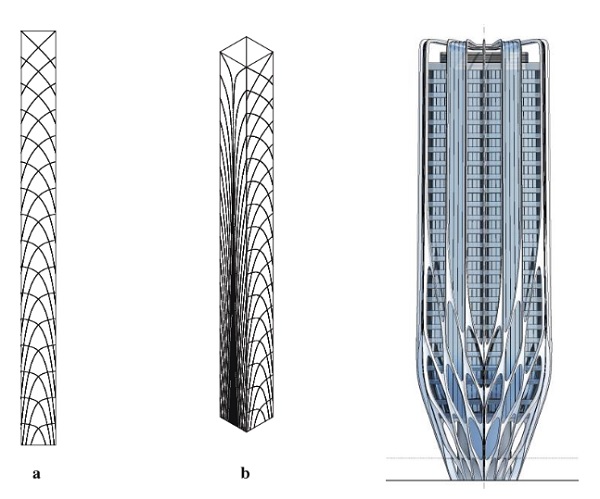 The a priori of modern engineering rationality is thus blind to the possibility of differentiating the tower structure along its vertical axis, either by gradually varying the pattern within a given system, for instance within the exo-skeleton, as displayed in diagram figures a and b, or by shifting and blending between different systems as shown in the elevation of ZHA’s residential tower scheme above, whereby what starts as a structural tube at the bottom transforms into a simpler framework structure. The possibility of such optimizing differentiations exposes the relative irrationality (structural inefficiency) of the modern structural rationality.

We are living in an increasingly dynamic and complex world where social institutions, social types and identities proliferate, hybridize and indeed seem to blend into each other, into a continuously differentiated social texture.

Stable stereo-types dissolve and fixed hierarchies have everywhere given way to fluid networks, both in our private and our working lives. We might summarize this by saying that our modern social typology has given way to a post-modern condition of social topologyi. 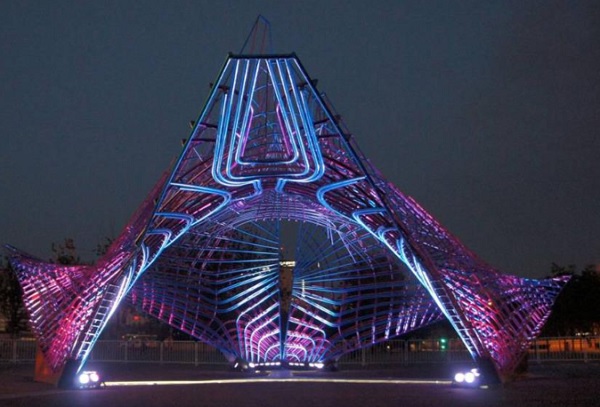 Zaha Hadid Architects CODE, Experimental Pavilion for Beijing Biennale 2013. Project is constituted by three hypar shells configured reminiscent of Felix Candela’s Chapel of St. Vincent de Paulvii in Mexcio City. These shell forms were translated as layered grid shells whereby the gridlines are configured according to the computed primary stress lines. Stress densities were translated approximately via the number of grid-line layers: one, two or three layers. The system was visually further articulated via the differential colouring of the layers.

This new fluid societal condition has a material base: the fourth industrial revolutionii with its ever more pervasive use of digital computing power crunching through ever bigger data sets in the quest for ever more subtly tailored adaptive product and service optimizations. 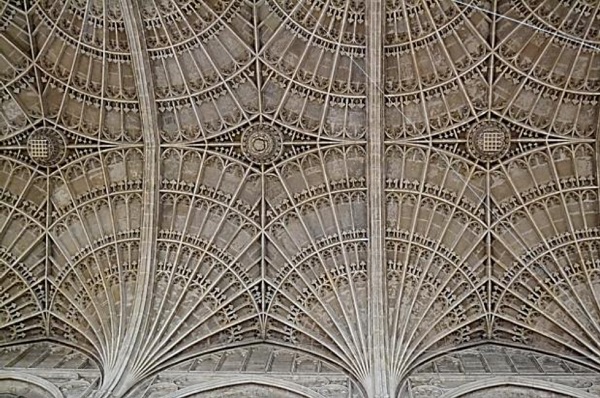 King’s College Chapel, Cambridge, 1446 – 1515, Gothic style fan vault. The variety and expressiveness of Gothic vaults clearly build upon structurally motivated patterns, and clearly heighten these patterns into an ornamental expressive state that communicates the special purpose and dignity of the space. These spaces are thus examples of what we are theorizing here as tectonic articulation.

This new social life process is also demanding a new congenial built environment, equally differentiated and fluid; and naturally this new built environment can be delivered only via upgraded architectural and engineering disciplines that are equally empowered by the new digital computing powers. 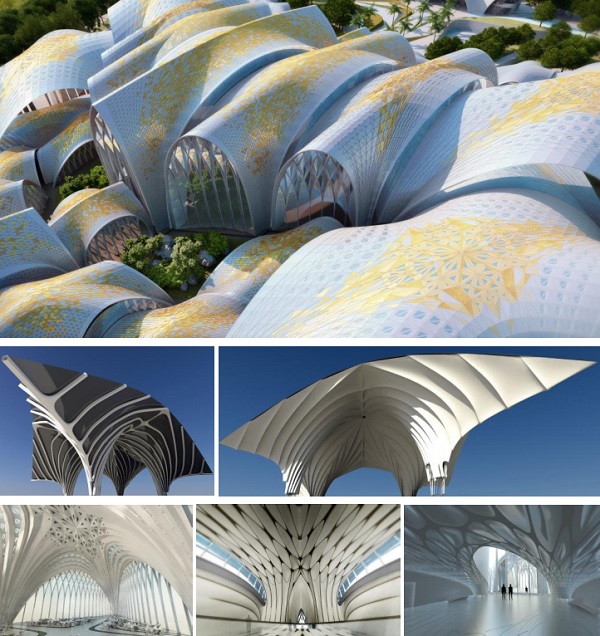 Zaha Hadid Architects, design for a palace, undisclosed location. The Palace is designed as a cluster of shells. Both the external shell forms as well as the internal ribbing and perforation patterns are based on structural optimization algorithms. There are many ways to set up and compute the structural optimization and thus this design method delivers a rich variety of articulations that can then be instrumentalized for the expressive semiological articulation and characterisation of the various spaces like central entry lobbies, grand ballroom etc. Some of the ribbing patterns also function as internal orientation lines indicating primary entry points and spatial centre points.

The new condition implies that each new construction project is characterized by both complexity and novelty. Routine solutions are out of the question. R&D is now always involved. This implies a closer collaboration between the various contributors: developers, architects and engineers.