Elastic geodesic grids (EGG) are lightweight structures that can be easily deployed to approximate designer provided free-form surfaces. In the initial configuration the grids are perfectly flat, during deployment, though, curvature is induced to the structure, as grid elements bend and twist.

Their layout is found geometrically, it is based on networks of geodesic curves on free-form design-surfaces. Generating a layout with this approach encodes an elasto-kinematic mechanism to the grid that creates the curved shape during deployment. In the final state the grid can be fixed to supports and serve for all kinds of purposes like free-form sub-structures, paneling, sun and rain protectors, pavilions, etc. 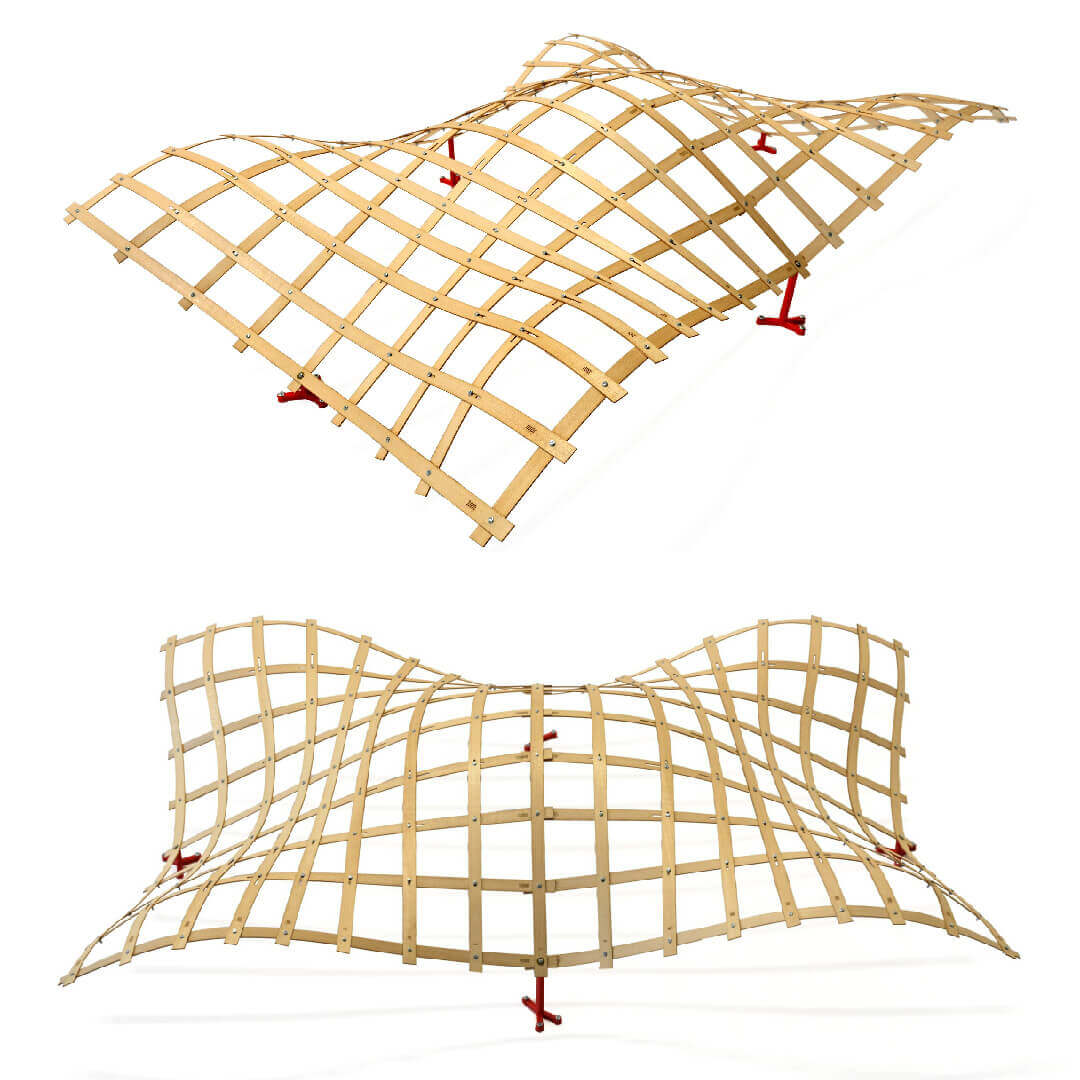 However, so far these structures have only been investigated using small-scale desktop models. We investigate the scalability of such structures, presenting a medium sized model. It was designed by an architecture student without expert knowledge on elastic structures or differential geometry, just using the elastic geodesic grids design-pipeline.

We further present a fabrication-process for EGG-models. They can be built quickly and with a small budget. 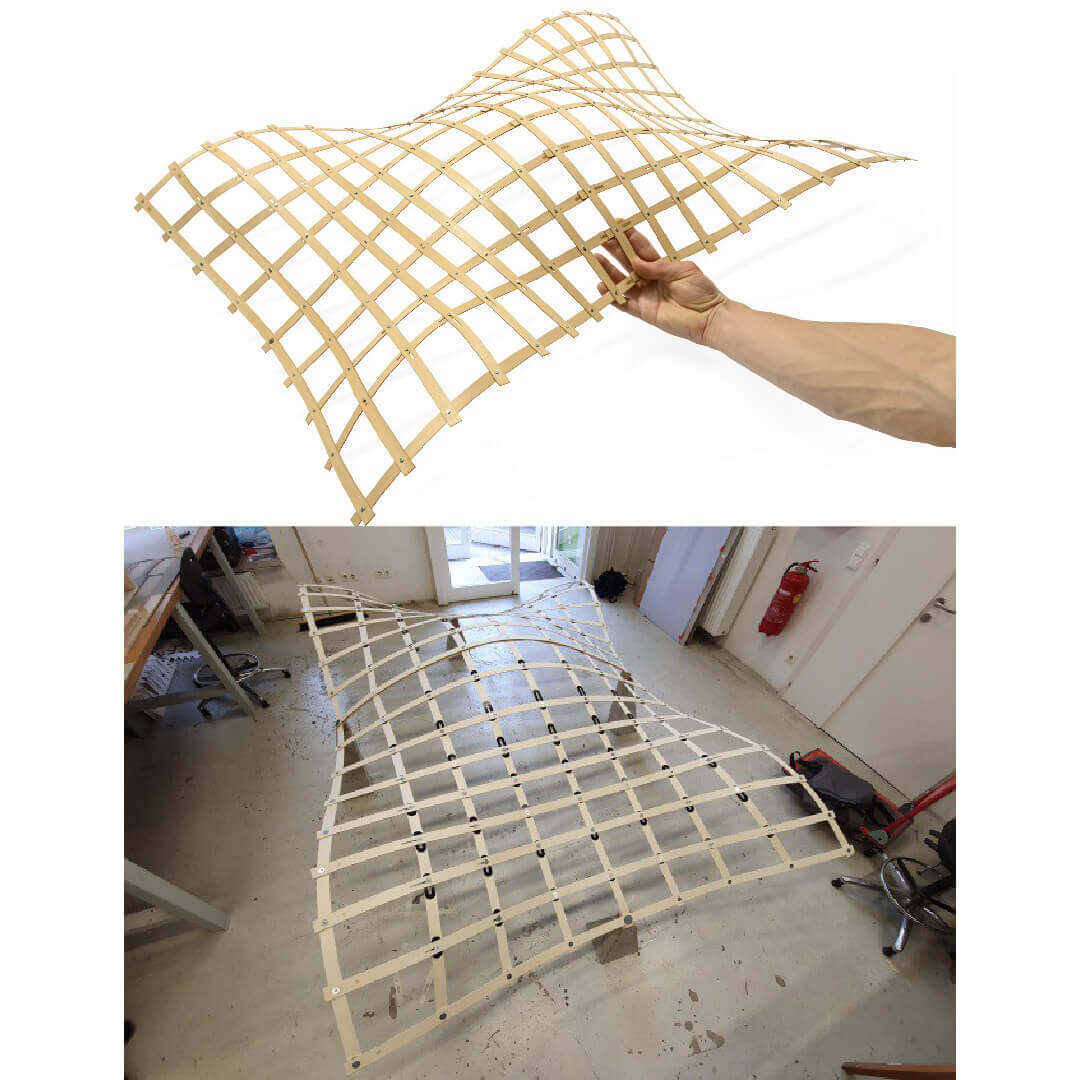 Elastic geodesic grids (EGG), proposed by [Pillwein et al. 2020], can be deployed from a planar state to a spatial state, where the spatial state approximates a design surface. The transformation between these states can be performed by simply pulling two corners of the planar grid apart and applying some additional bending. 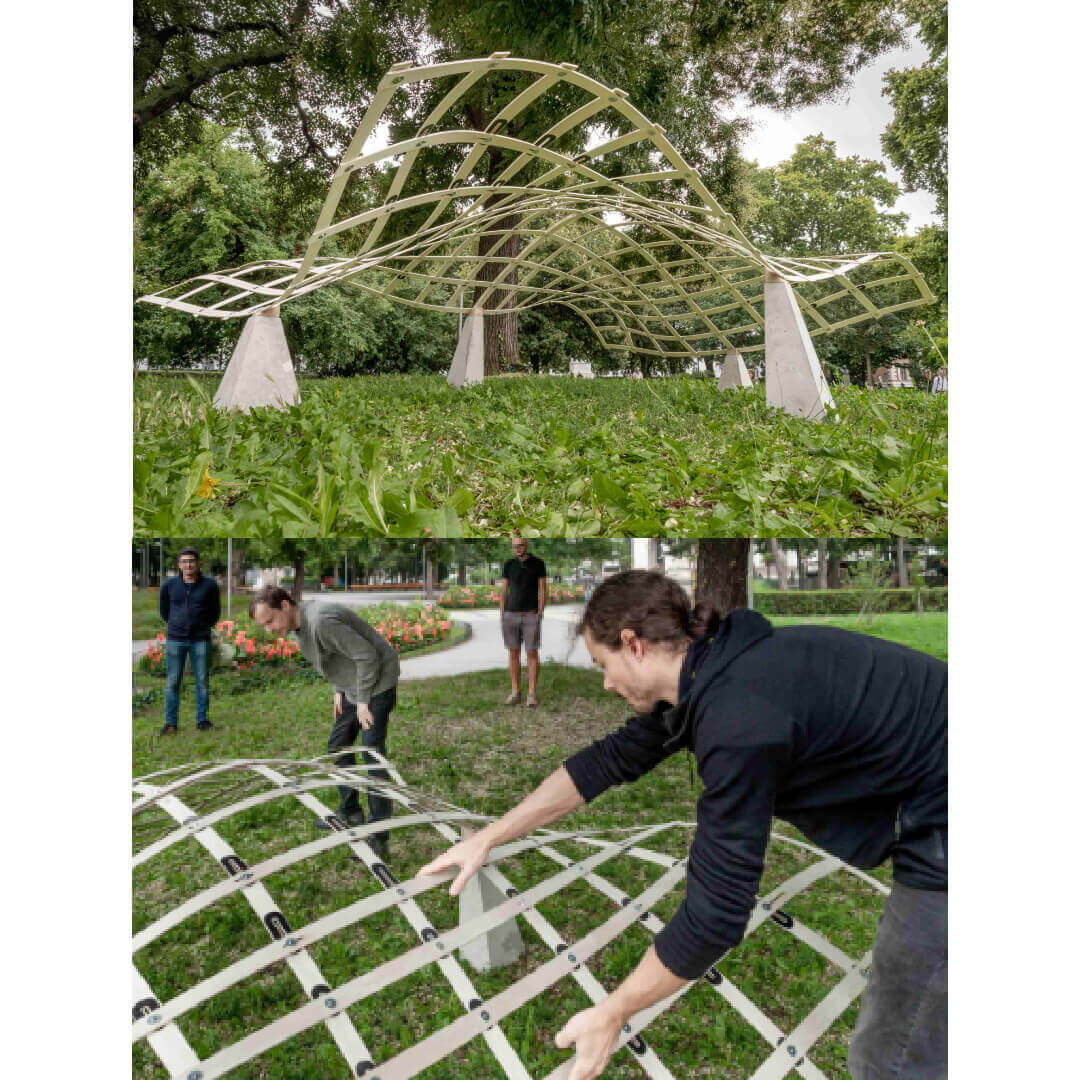 The deployment approach makes the creation of doubly-curved shapes quick and material efficient. Lightness and easy assembly make the grids applicable for mobile purposes. Also, their fabrication does not involve complicated techniques, the presented structure was built using simple resources like plywood, screws, washers and nuts.

If advanced tools are not available, it could even be built using a tape measure, a drill, and a saw. Light grid structures are particularly suitable for applications where large spans and low weight are required. This makes them potential candidates for architectural purposes. 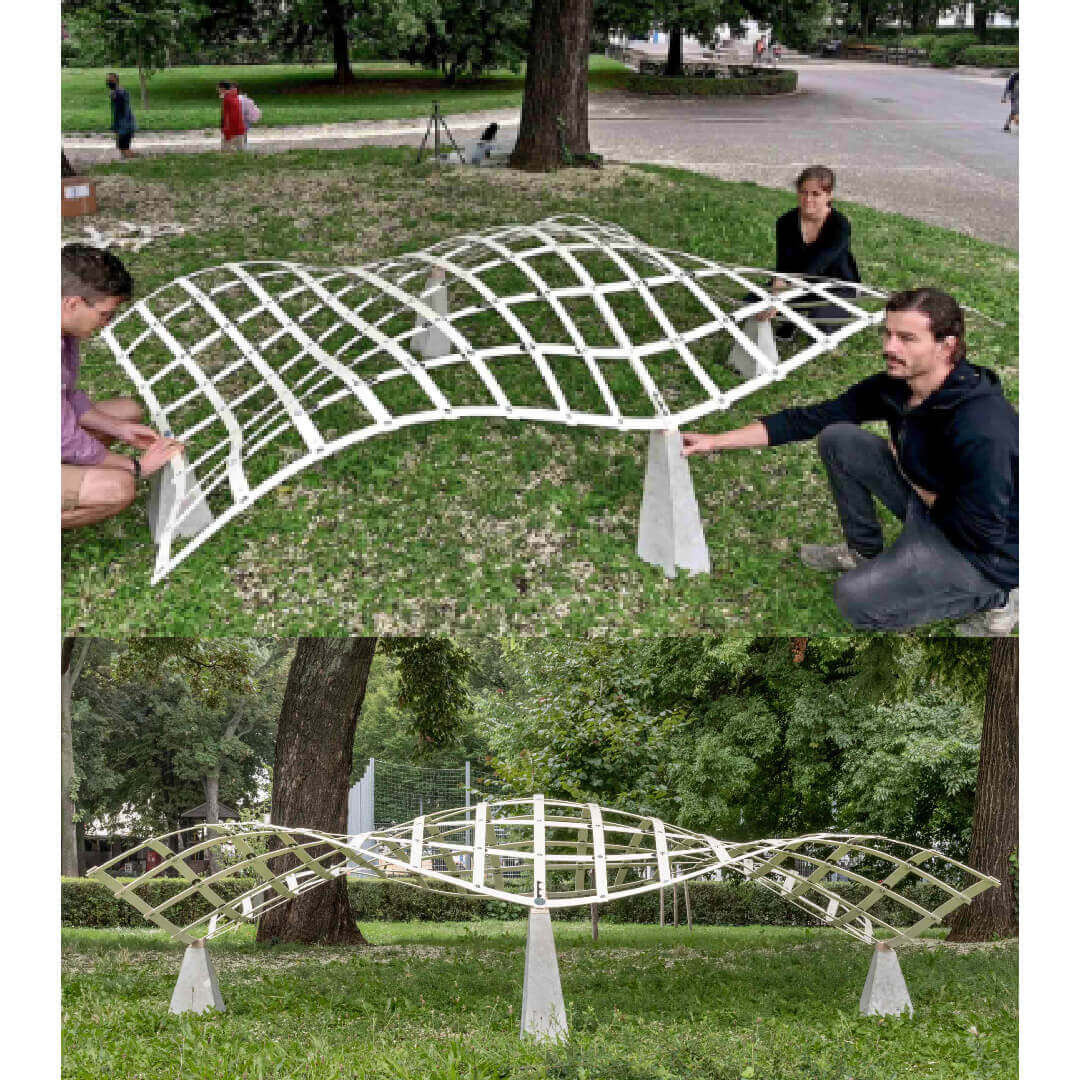 The EGG-approach of [Pillwein et al. 2020] takes a design surface as input and results in a grid layout that can be deployed to approximate this surface. The layout is found geometrically and simultaneously on the design surface and in the plane. This makes the computation of grid layouts efficient, as neither design iterations nor physical simulation are needed for finding layouts.

Despite the similarity of using geodesics as grid curves, in contrast to [Soriano et al. 2019], elastic geodesic grids use the concept of notches.

The choice of using geodesics as grid curves is mainly motivated by practical reasons: A thin strip of material can be wrapped on a surface and interpreted as a tangential strip with the centerline of the strip being a geodesic on the surface. This means that the planar grid can be fabricated from straight lamellas, where the deployment-mechanism encoded in the layout does the wrapping.

Fabricating an elastic grid with straight lamellas is material and cost efficient, allows easy assembly, and facilitates transport, as the lamellas can be stacked in a small volume.