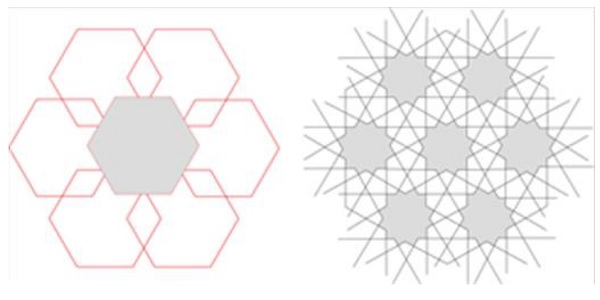 There is a lack of knowledge that is required for using computer programs (parametric computing) to generate and derive new Islamic geometric patterns locally.

This study focuses on the application of parametric modeling using the Rhinoceros 6 Grasshopper program on an Islamic geometric historical pattern, which decorated the gate of the School in Wasit, where the search imposes a spatial approach.

Figure 2. The (IGP) with cell and fundamental unit (Autocad 2020 drawing)

This program is applied with the help of the algorithmic parameters used by the parametric design technique to generate and derive new Islamic geometric patterns from an extinct reference pattern used in contemporary urbanism.

The goal is to enhance and impart an attribute of cultural inclusion and architectural originality to the local architecture of cities.

Therefore, the Rhinoceros 6 Grasshopper program can be used by architects and urbanites to devise distinctive design alternatives based on historical patterns and heritage models that can be applied in the future design of urban areas and cities that belong to the Islamic civilization.

Islamic Geometric Patterns (IGPs) can be observed with regularity traits, in both, artificial and natural structures. The Alhambra palace that has distinct Islamic geometrical patterns, demonstrated the relationship between Islamic geometrical patterns and the Islamic architecture that appears in several types of building elements such as, tiles or tessellates made of space-filling shapes produced by repetitive cells in two directions, these tiles contain complex polygons formed by the intersection of a group of circles.

IGPs are a set of patterns that appear on interior surfaces such as walls, ceilings, doors, and other surfaces. The development of Islamic architecture has constantly changed with the progress of time.

The presence of IGPs greatly affects the design and the construction of buildings and structures, which allows for the identification of architectural movements, regional styles, and building elements in Islamic architecture.

The importance of the past can be expressed by defining heritage revival (synonymous with heritage revolution, the ascent of history, etc.), as a priority in architecture.

Figure 12. The whole grid of (IGPs) that contains the nine-fold pattern and the hexagonal grid (Rhinoceros 6 drawing)

This means that the connection between heritage revival and the development of designs related to new projects, by referring to traditional buildings and architecture (Sherine S. et al./2011), in the threedimensional modeling of architectural elements that fulfill historical, artistic, and constructive aspects, is based on the usage of programs for heritage development.