Assessing the Complexity of Timber Gridshells in Architecture through Shape, Structure, and Material Classification

New possibilities offered by recent modelling software allow the design of organic shapes that are appealing to architects and engineers but may encompass serious issues such as an overconsumption of materials.

In this context, there is a renewed interest in systems allowing the materialization of curved surfaces such as timber gridshells, which can be defined as shells with their structures concentrated in strips. 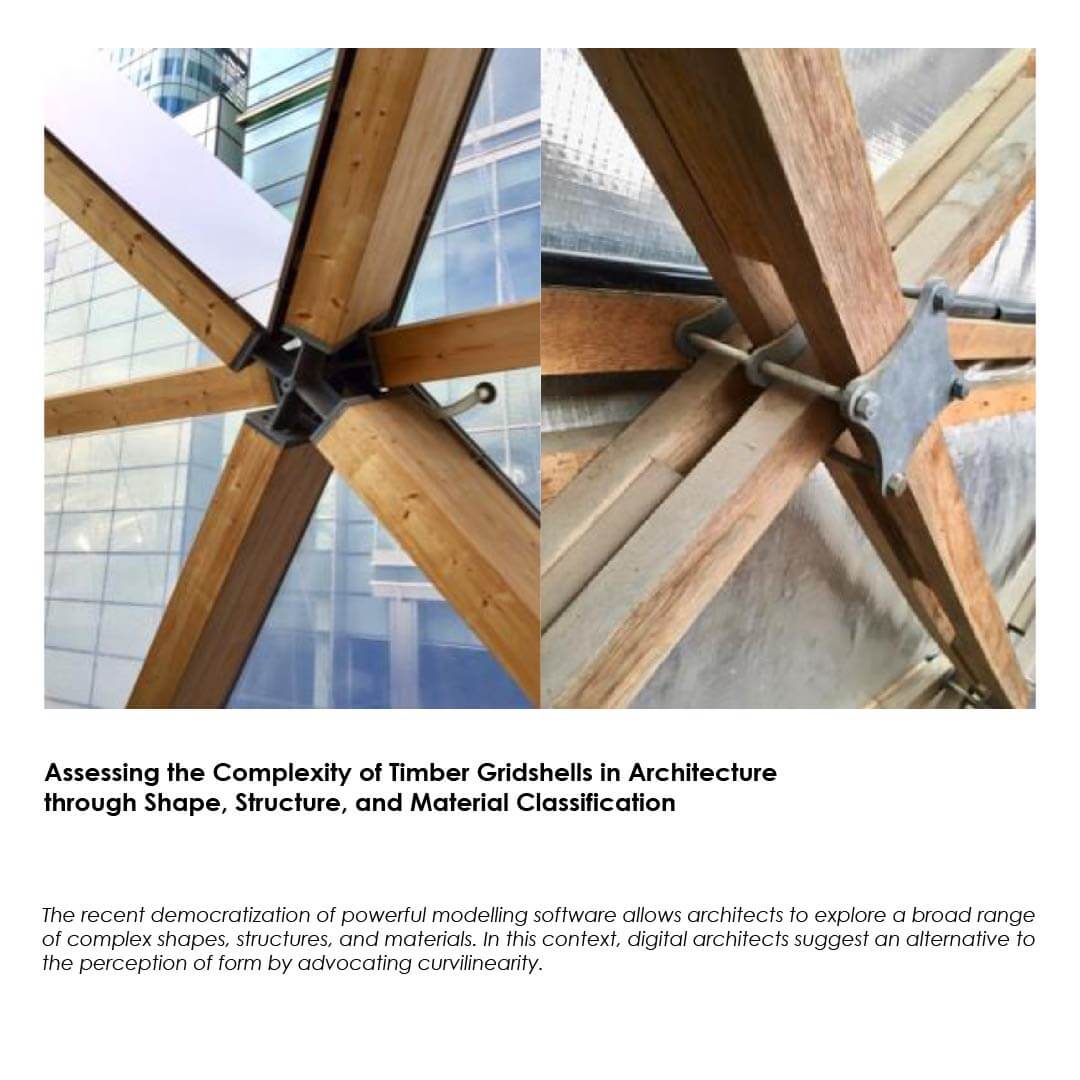 These upheavals highlight the need for a classification system to seize the potential and the limitations of timber gridshells to address complex geometries.

The classification of 60 timber gridshells enables a critical examination in the course of the ceaseless quest for complexity in architecture by evaluating current building possibilities and predict future building opportunities in terms of form, structure, and materiality. 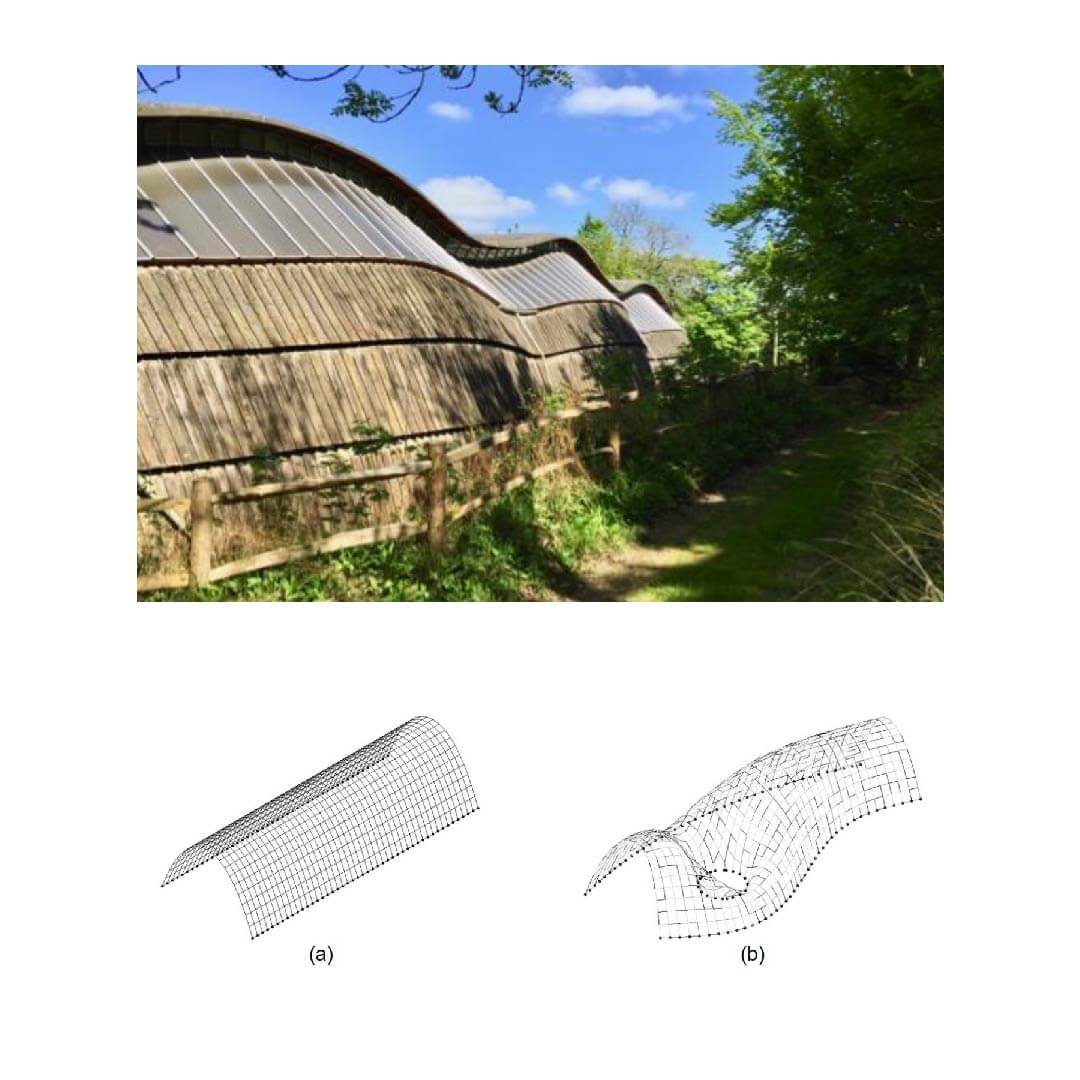 For instance, there is a renewed interest in gridshell structures, which can be defined as “a shell with large openings in it in a manner that allows the remaining strips or grids to behave, structurally, as a shell”.

Unlike shell structures constructed with panels, gridshells redirect the compression and shear forces along the longitudinal axis of their members and therefore minimize the amount of material to cover large-span spaces.

However, there are few built precedents in the world. The main reason for their underutilization, once attributed to a lack of knowledge and data, has now shifted toward manufacture and constructive issues, which are different depending on the category of gridshells. 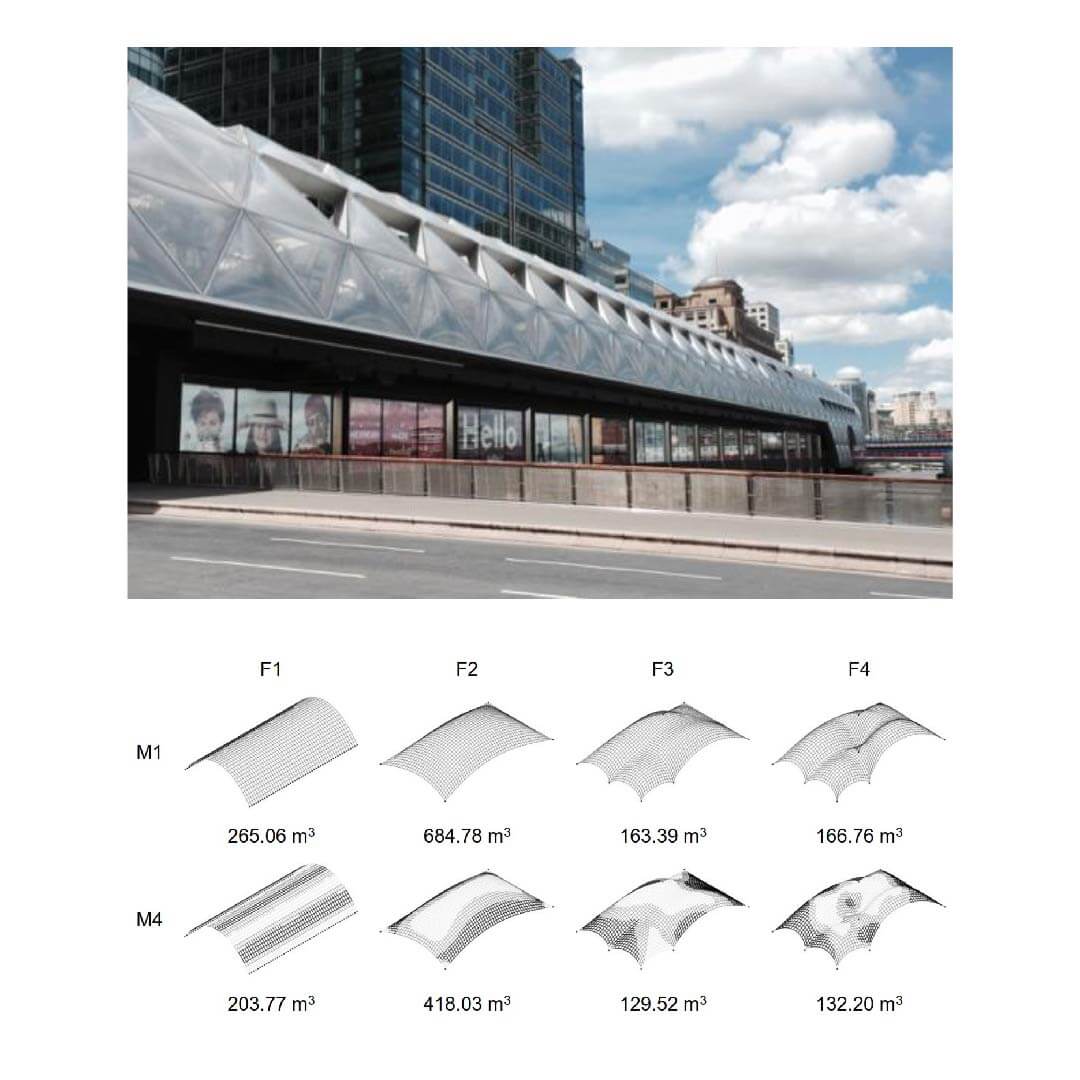 Elastic gridshells are characterized by a flat grid made of unbent continuous laths, which is subsequently deformed into the desired shape.

The advantage of this system lies in the materialization of curved shapes using straight members with standard wood sections and unique connectors.

The Weald and Downland gridshell is a well-known contemporary example, but its erection has implied, among other limitations, the need for a large construction site for on-site manufacturing and a slow phase of construction due to the difficulty to manipulate the flat mat using straps and scaffoldings. 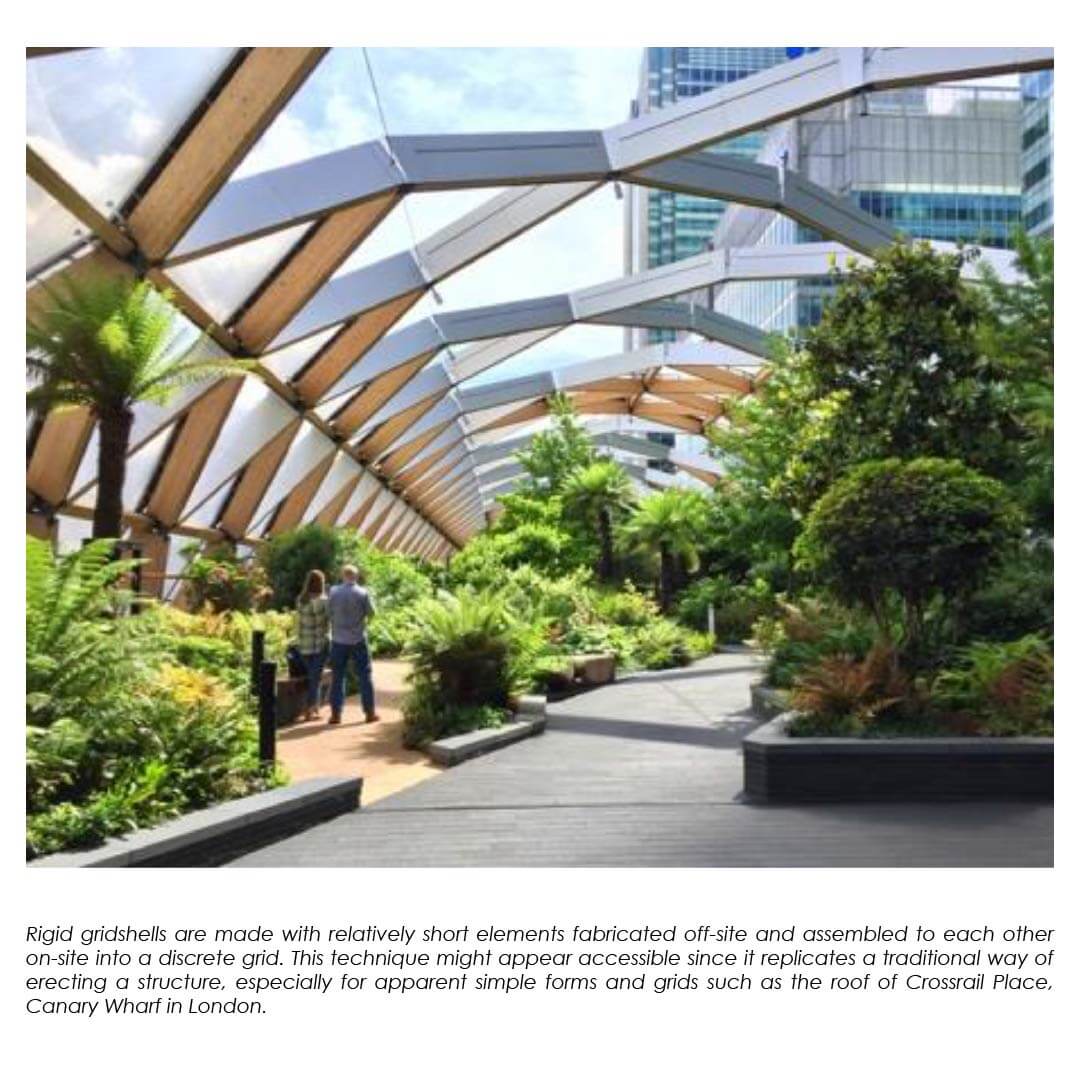 Rigid gridshells are made with relatively short elements fabricated off-site and assembled to each other on-site into a discrete grid.

This technique might appear accessible since it replicates a traditional way of erecting a structure, especially for apparent simple forms and grids such as the roof of Crossrail Place, Canary Wharf in London. 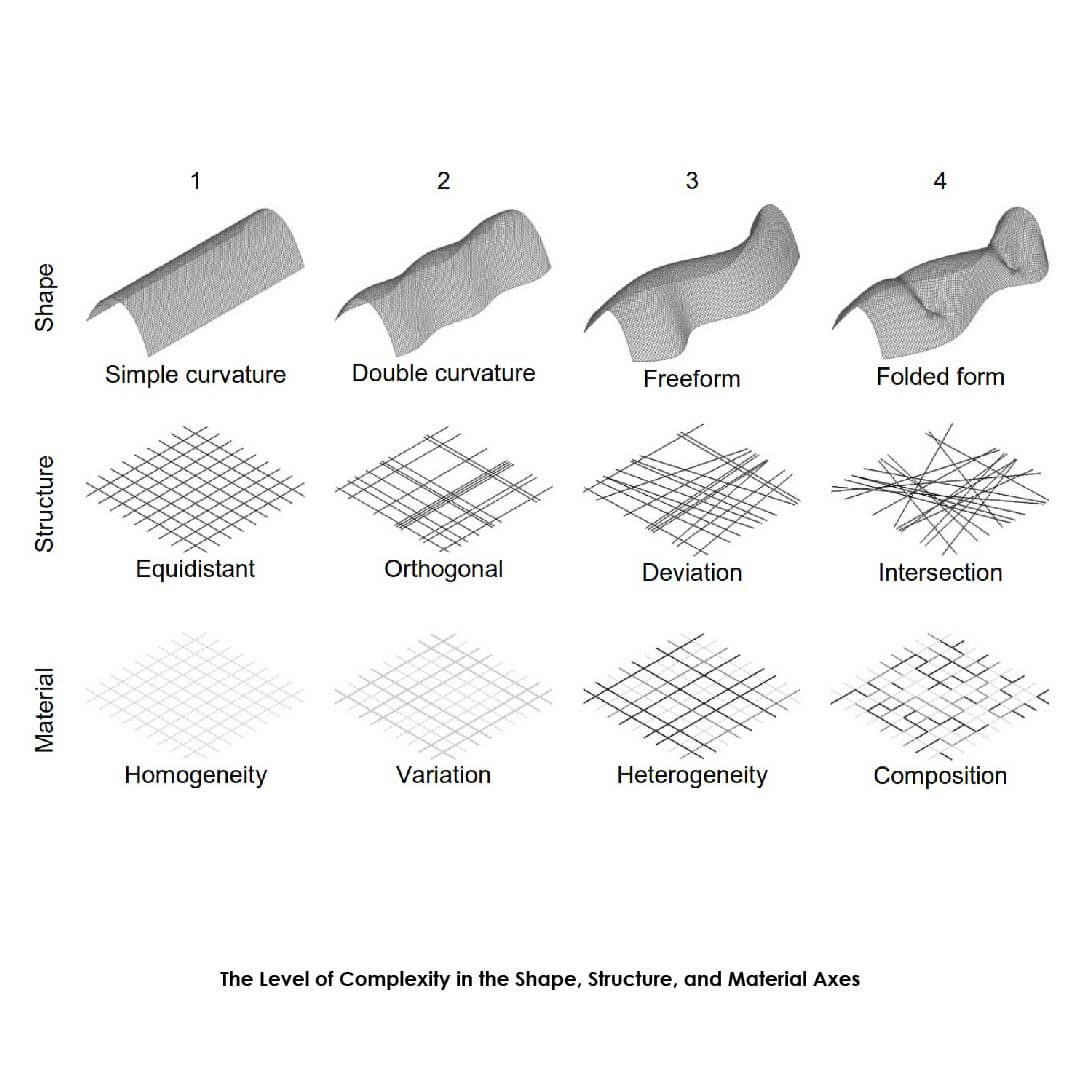 Nonetheless, in this project, the axis of each successive element twists slightly around the roof; the angles at the nodes become more acute and asymmetric creating a broad range of diversified steel node connections.

Thus, even if irregular grids can offer more structural redundancy, they generally increase the challenge of components manufacturing.