This film was made by Ashok Rupner TATA Trust: Education is one of the key focus areas for Tata Trusts, aiming towards enabling access of quality education to the underprivileged population in India. Make a wonderful HYPERBOLA from straight sticks! This work was supported by IUCAA and Tata Trust.

One-sheeted hyperboloids are used in construction, with the structures called hyperboloid structures. A hyperboloid is a doubly ruled surface; thus, it can be built with straight steel beams, producing a strong structure at a lower cost than other methods. Examples include cooling towers, especially of power stations, and many other structures. 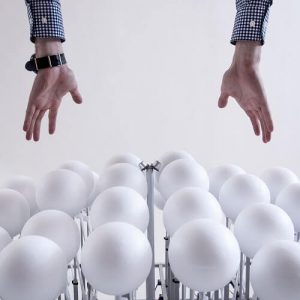 Reflection of the Age

Juraj Kotian created an installation that would react to movement. The closer the viewer gets to the structure, the closer is gets to him. Once the viewer crosses a specific boundary, it goes back to its starting position to literally escape from the viewer's touch. 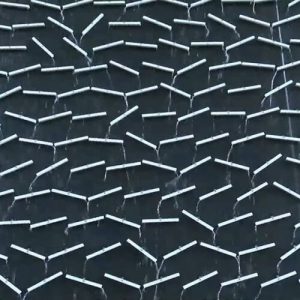 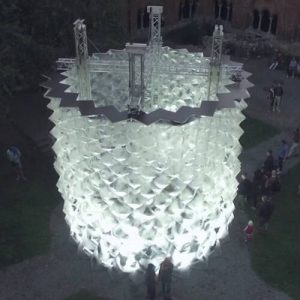 During the Contemporary Culture Forum White Night, an architecture, light and sound installation Parametric Glacier was on display at the Dome Cathedral garden in Riga. 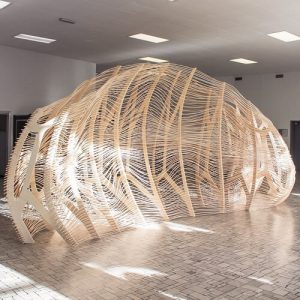 Weaving Enclosure is an experimental installation developed by ACTLAB in 2014 and a synthesis of a research on the emergent properties of weaving material system in architecture. 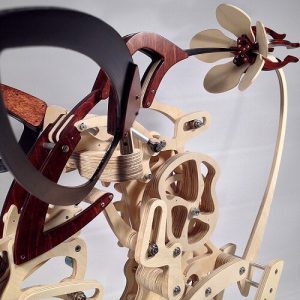 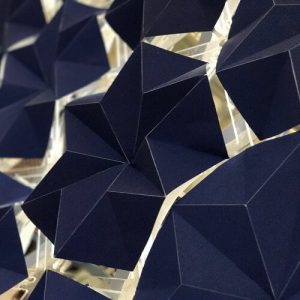 This video shows the design, fabrication, and programming of a responsive screening device by GenoMorph that employs origami techniques. The pattern response to light change within the built environment and change shape accordingly. 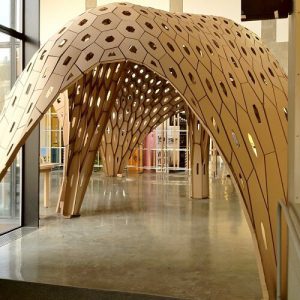 This project by Matsys was the result of a 4-day workshop taught with Marc Swackhamer at the University of Minnesota School of Architecture in March 2012. 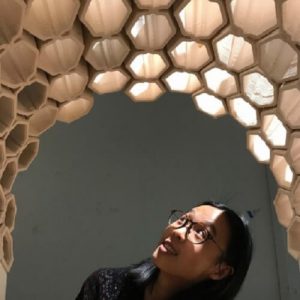 Students at the University of Waterloo School of Architecture in Cambridge, Ontario are bringing a whole new meaning to mixed media as they take on both 3D printing and the use of ancient clay building materials. 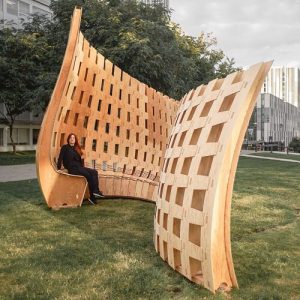 Robots sliced the interlocking, curved wooden slats that form this sculptural bench, which is currently installed on the campus of the Vancouver's University of British Columbia. 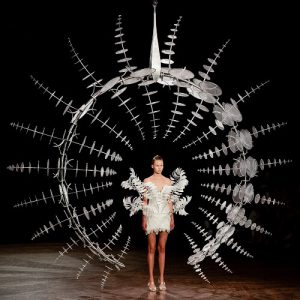 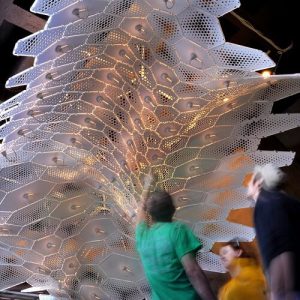 EXOtique by Project One Studio is a backlit ceiling installation that was created at the foyer entrance of a university building. The patterning is based on light distribution throughout the piece, while the form redefines the space. 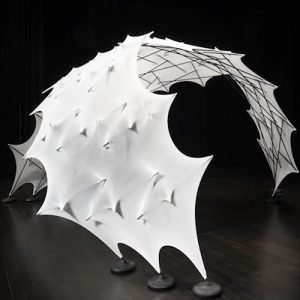 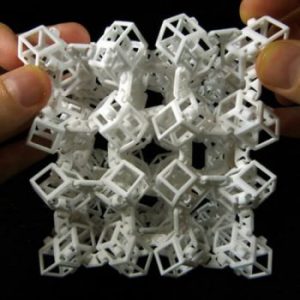 The Jitterbox is an example of an auxetic material: if you pull on it, it expands in all directions. The Jitterbox mechanism is due to Taneli Luotoniemi. Henry Segerman has made some 3D printed models... 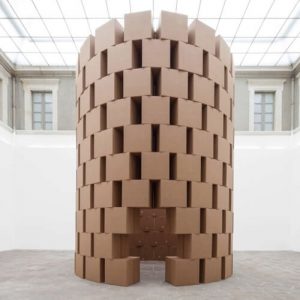 Zimoun is best known for his installative, generally site-specific, immersive works. He employs mechanical principles of rotation and oscillation to put materials into motion and thus produce sounds. 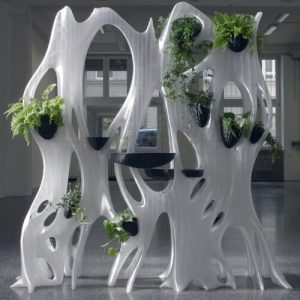 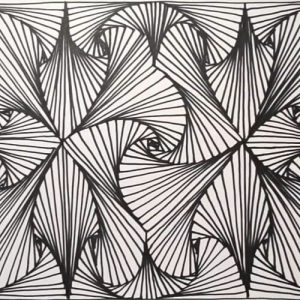 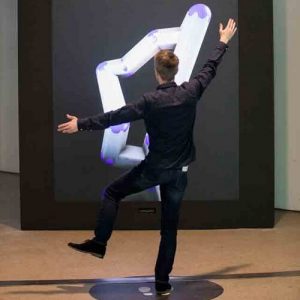 In Future You, an interactive installation by Universal Everything you are faced with a unique reflection of your potential, synthetic self. Starting as a primitive form, it learns from your movements to adapt, suggesting an agile, superior version of you. 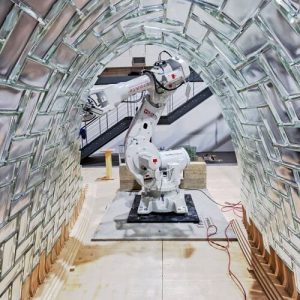 The Glass Vault is a joint effort between SOM and Princeton University c.r.e.A.te lab and Form Finding Lab, with assistance from the TU Delft Glass Group and is one of the SOM’s latest demonstration projects in automated robotic construction. 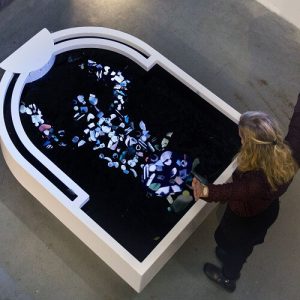 Plastic Reflectic is an interactive installation that reflects on the problem of the “plastic soup” in our oceans. Enormous amounts of plastic waste end up in the ocean, where it slowly degrades into tiny particles. 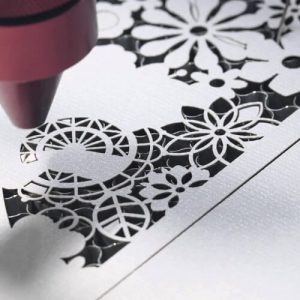 In this video you can take a look at a Gen 4 – BOSS Laser Cutter-2436, cutting out an example wedding invitation on some paper. 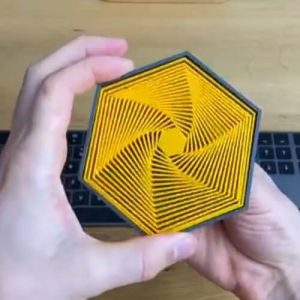 This is a small geometric toy by mars gizmo that's oddly satisfying to play with. It can be used as a desk decoration. Ideally you need 4 small magnets for this toy. 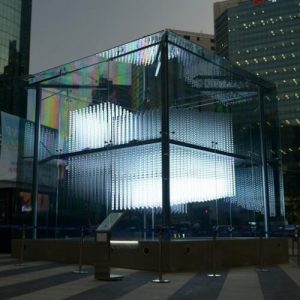 Brilliant Cube by Media Artist Group: Jonpasang is a kinetic 3D matrix, comprised of 576 clear LED poles moving up and down. The dimension is 6M X 6M X 6M. It is located at Gangnam station crossroads. 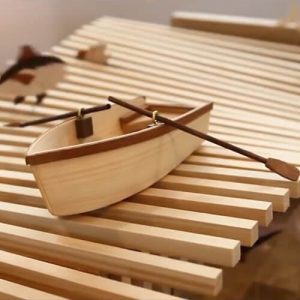 Artist Ross McSweeney created a wonderful kinetic wooden sculpture that features a little boat floating upon a bumpy sea. Three different types of fish appear to jump out of the waves as they rise and fall, both horizontally and vertically. 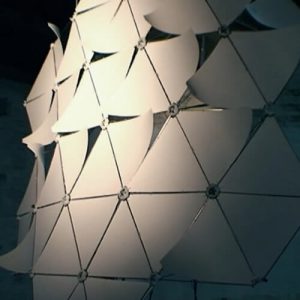 As part of his research at Aalborg University, Esben B. Skouboe had the privilege to work with a team of skilled programmers, engineers and architectures to elaborate the initial findings done the workshop Environmental Response.