Helio Curve is a kinetic sculpture by Reuben Margolin created for Hyundai Motor Company. It has two mechanical drives located 65 feet apart the ground. These produce continuously varying motion, which is translated through strings to the top of a 15 foot steel cube and then down to 400 wooden blocks.

Designer wanted to create a continuous, yet transparent moving form. After experimenting with different shapes he settled upon an open celled wooden block that would allow the light to percolate through a solid surface.

The blocks are all T-slotted together to allow for lateral stability, while still allowing relative vertical movement. 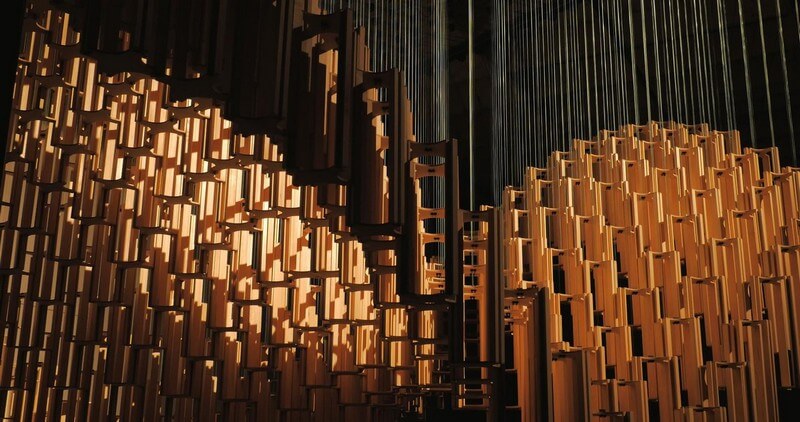 He placed the mechanical drives on the ground so that people could see them better, and added a secondary arm to the mechanism. This secondary arm is connected by a roller chain to a fixed sprocket, and so it rotates in the opposite direction as the primary arm, giving a constantly changing amplitude and frequency.

There are two of these drives, and their cumulative motion is added together in the wooden blocks. Because this epicycloid movement reminded him of the varying orbits of celestial bodies, and because the form of the drives reminded him of sundials, he settled on the title of Helio Curve.