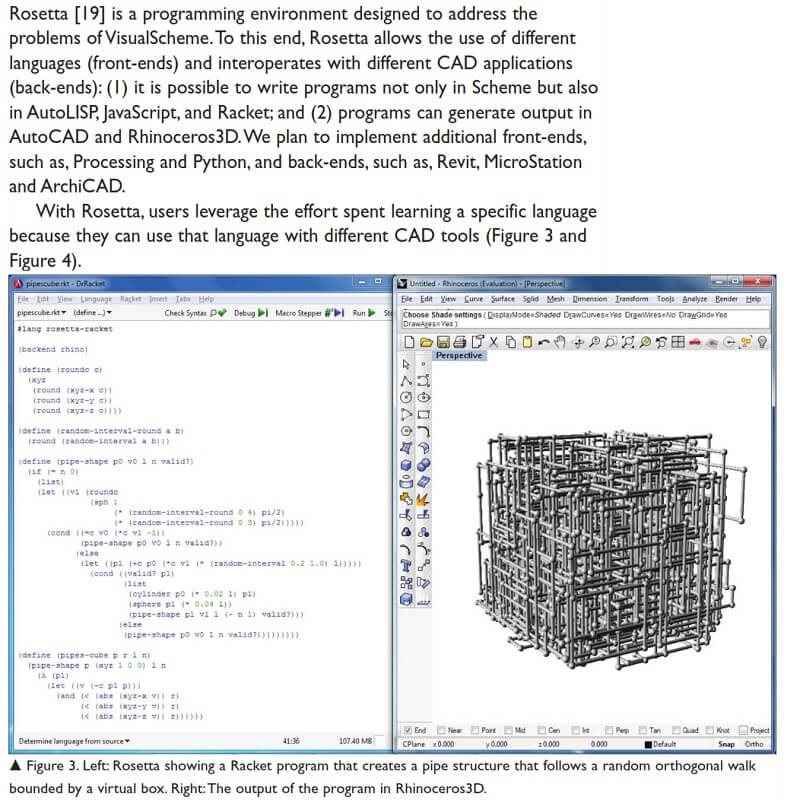 In the field of Generative Design (GD), Visual Programming Languages (VPLs), such as Grasshopper, are becoming increasingly popular compared to the traditional Textual Programming Languages (TPLs) provided by CAD applications, such as RhinoScript. This reaction is explained by the relative obsolescence of these TPLs and the faster learning curve of VPLs. However, modern TPLs offer a variety of linguistic features designed to overcome the limitations of traditional TPLs, making them hypothetical competitors to VPLs. 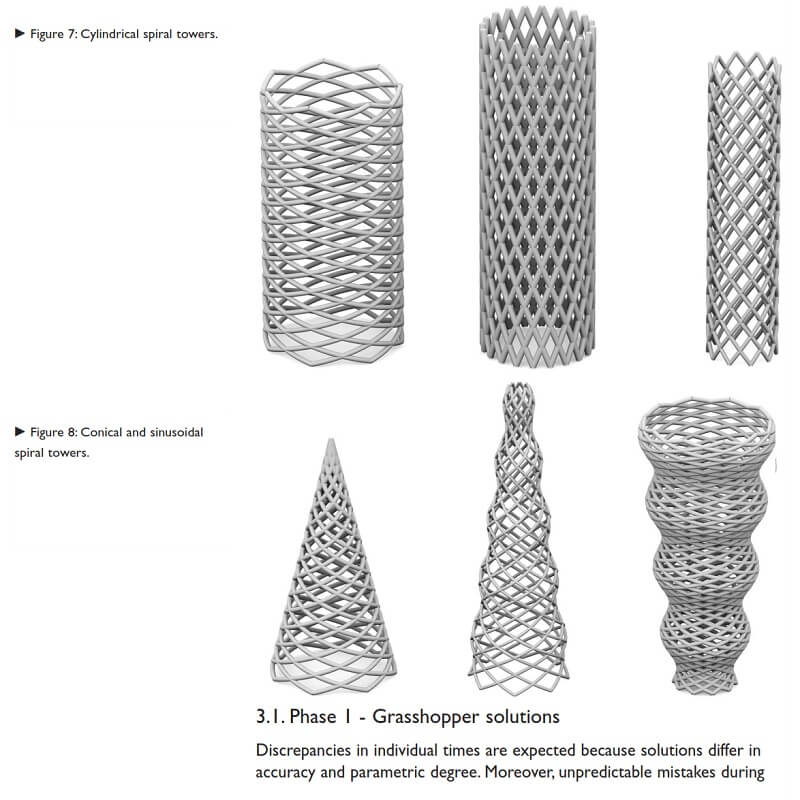 In this paper by António Leitão, Luís Santos and José Lopes, authors reconsider the role of TPLs in the design process and they present a comparative study of VPLs and modern TPLs. Their findings show that modern TPLs can be more productive than VPLs, especially, for large-scale and complex design tasks. Finally, they identify some problems of modern TPLs related to portability and sharing of programs and they propose a solution. 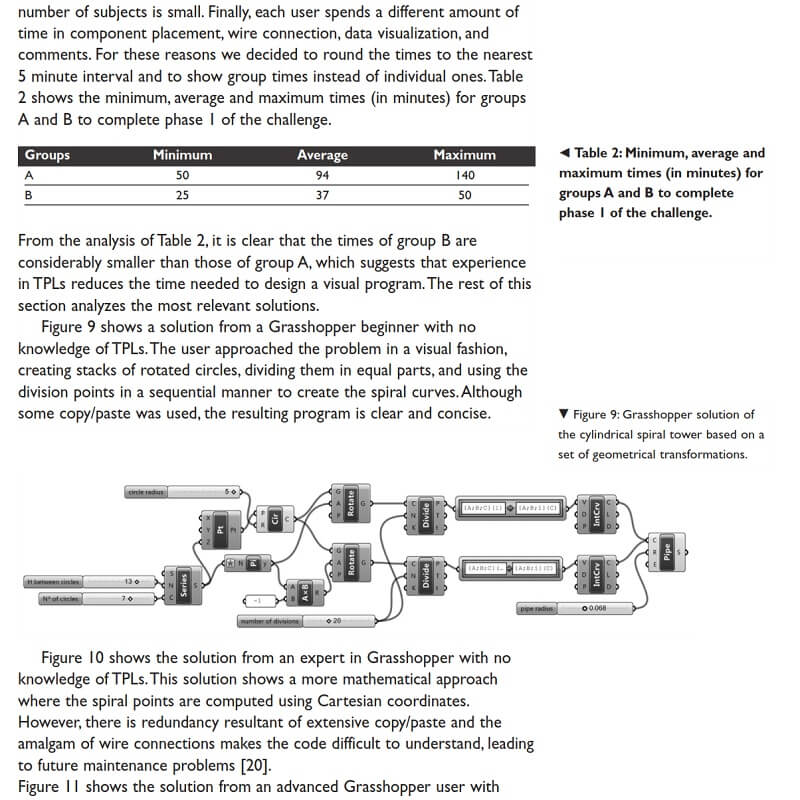 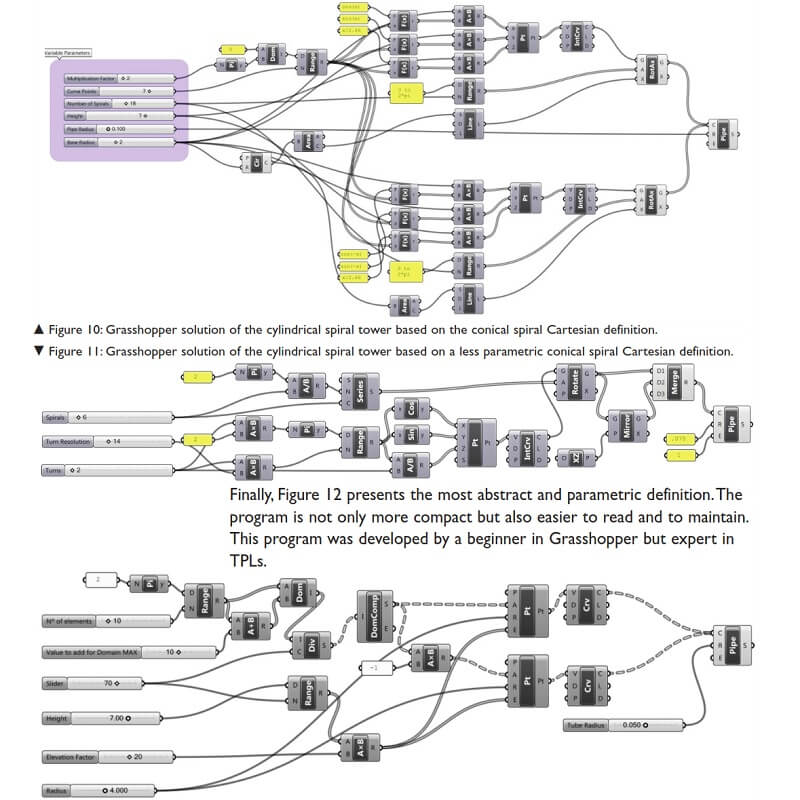 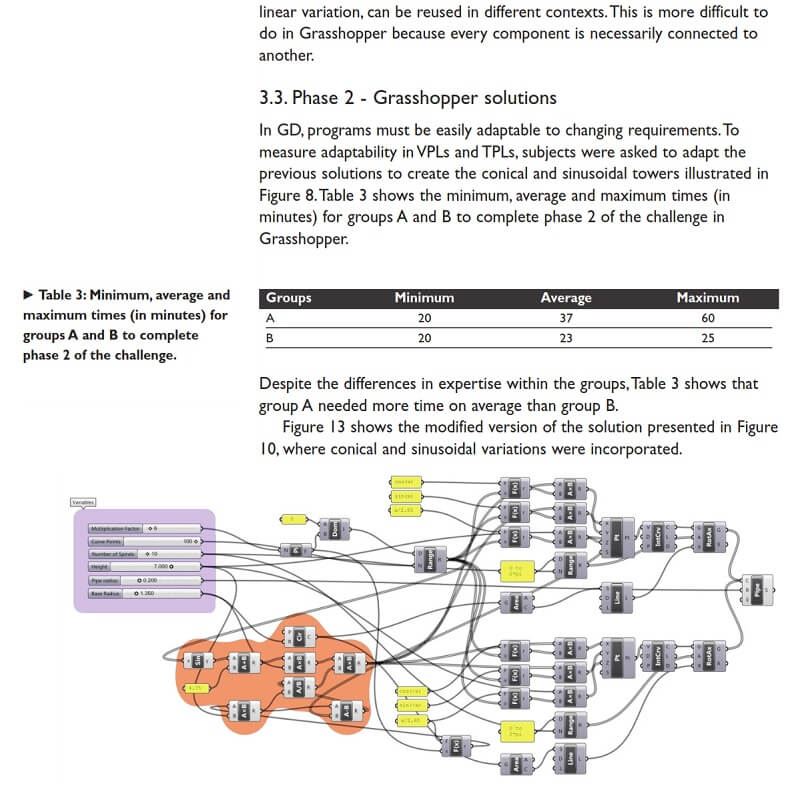 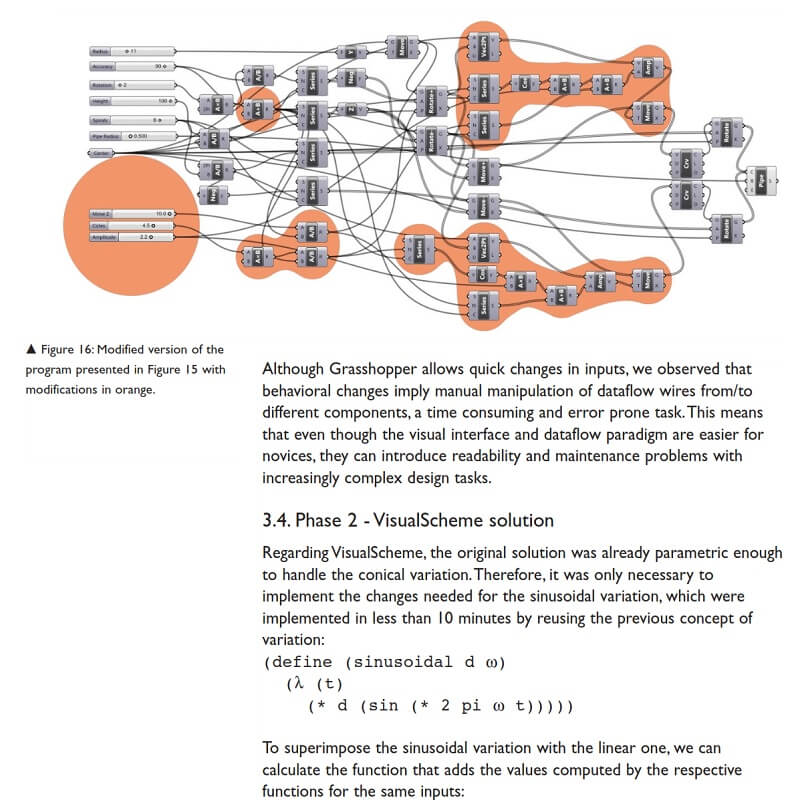 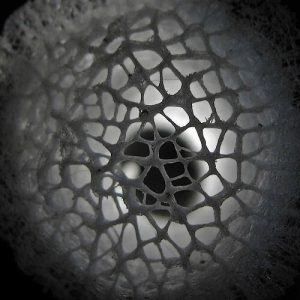 This research investigation by Quratulain Asghar and Syed Muhammad Zille Ali Naqvi, carried out in the fourth year architecture design studio, aims to investigate bio-mimicry as a development process, involving it for architectural design. 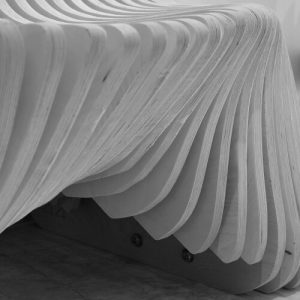 This paper by Ioanna Symeonidou discusses the methodology, educational process and design outcome of the studio course "Furniture Design with Digital Media: From Design To Production". 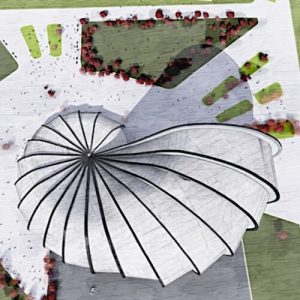 Biophilia is the innately emotional affiliation of human beings to other living organisms.. The biophilic design which is the main focus of this article by Bujar Bajçinovci. 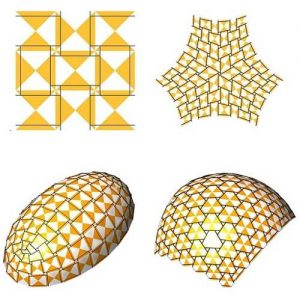 This grasshopper example by Petras Vestartas is useful for someone who wants to start studying reciprocal patterns. 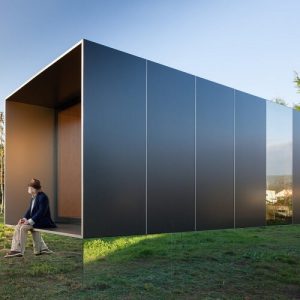 This research by Robert Doe makes the case that integrated computational design tools, combined with better strategies for prefabrication, can exploit synergies to improve the quality of homes in Australia. 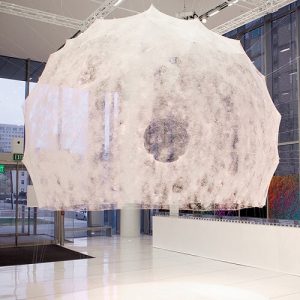 In this paper by Neri Oxman et al. the formation of non-woven fibre structures generated by the Bombyx mori silkworm is explored as a computational approach for shape and material optimization. 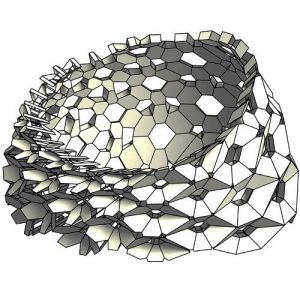 The starting point of this Master’s thesis by LUKAS NORDSTRÖM and AGNES ORSTADIUS is the linear design process of timber production company Martinsons. 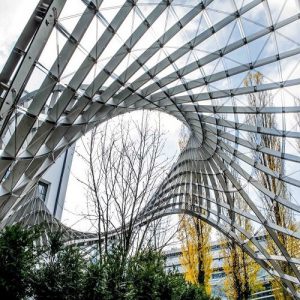 In this paper, Eike Schling aims at strained gridshells built entirely from straight or circular lamellas of the same radius and with orthogonal nodes. The lamellas are aligned normal to a reference surface, enabling an elastic assembly. 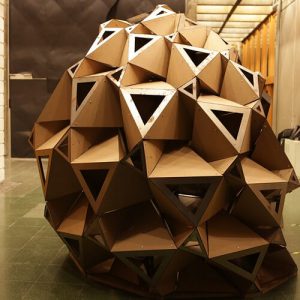 Multiverse of a Form

Within the scope of this study, the multiverse of a form(ation) is explained throughly and examplified through snowflake pavilion which is issued to 4th year and graduate students in the scope of an elective studio course. 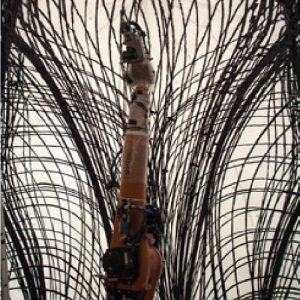 The aim of this thesis by Ehsan Baharlou is to investigate the generative potential of agent-based systems for integrating material and fabrication characteristics into design processes. 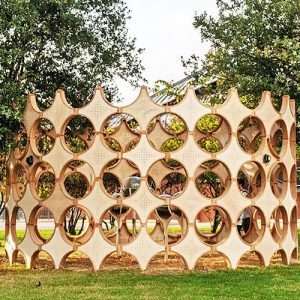 With this paper, authors illustrate how two low-budget interventions have re-activated a forgotten public space. 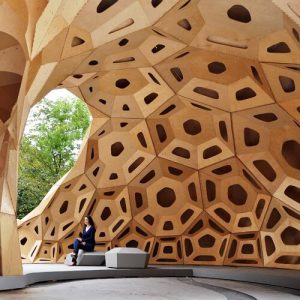 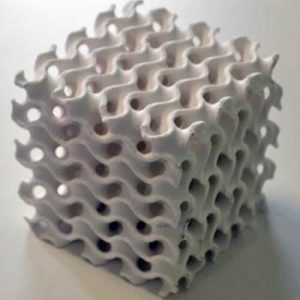 This research by Michela Rossi and Giorgio Buratti aims to apply digital tools to the design of surface structures that maximise the matter efficiency in the development of "solid fabrics'' with parametric controlled geometry. 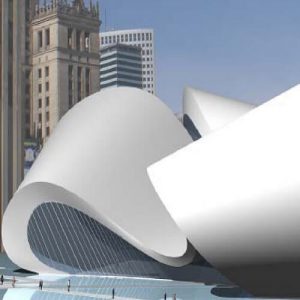 The purpose of this thesis by Louise Pedersen and Jonas Täljsten is to make a connection between architect students and engineers, to find the differences between them and to try to collaborate. 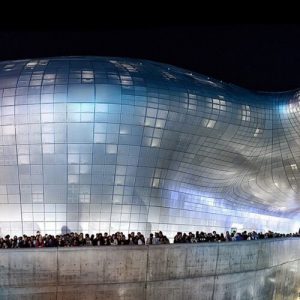 This research proposes optimal daylight performance for the facade of an existing building, which helps designers improve daylight generating optimized design options and understand the relationships between design variables and performance metrics. 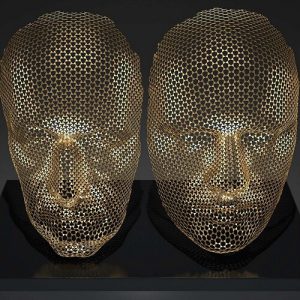 Authors present a computational method for interactive 3D design and rationalization of surfaces via auxetic materials, i.e., flat flexible material that can stretch uniformly up to a certain extent. 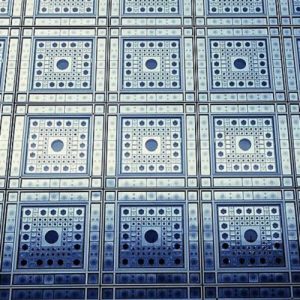 Orbi by ar_grasshopper_collective_thn is a plug-in for Grasshopper that generates patterns parametrically with symmetry groups. Orbi allows to select a symmetry group and define any geometry as the fundamental region of a pattern. 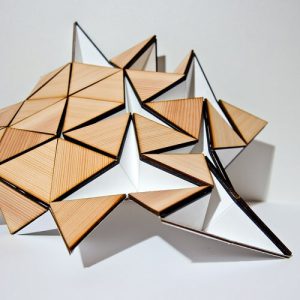 In this research, authors suggest a methodology for designers to get benefit from origami art in their design, depending on four main sections: literature review, the basics of the geometry, computer programs and methods of fabrication. 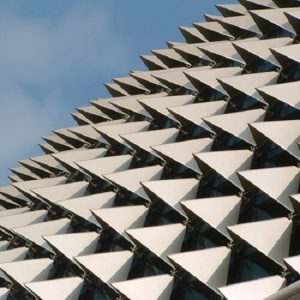 The purpose of this research by Shahab Din Rahimzadeh is to assess daylight performance of buildings with climatic responsive envelopes with complex geometry that integrates shading devices in the façade. 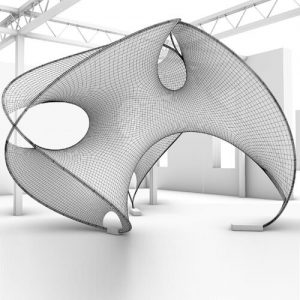 the main focus of this work by Seiichi Suzuki is to develop a comprehensive approach for enabling topologic transformations with real-time physics named topology-driven form-finding. 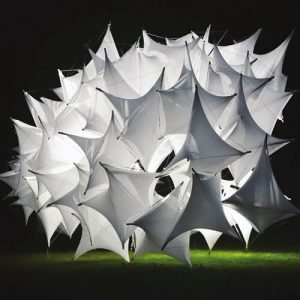 This paper by Gernot Riether, Andrew Wit and Steven T Putt will show how architects can gain the ability to design tensegrity structures digitally utilizing physics engines that simulate these form finding processes in real time. 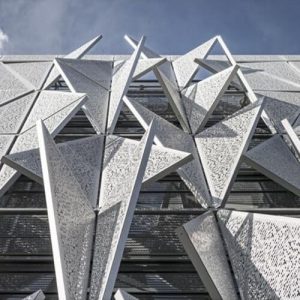 In this study by Rana Ahmed Bahaa El-Dabaa, a parametric script is developed for Kinetic facades to enhance daylight performance. Parametric Daylight simulation was performed through Rhino software using plugins Grasshopper and Diva. 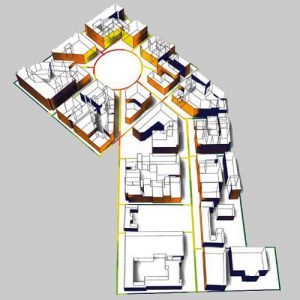